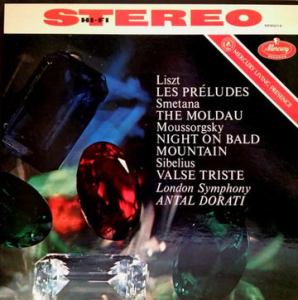 If you are picky about your covers please let us know in advance so that we can be sure we have a nice cover for you.

This vintage Mercury Living Presence stereo pressing has the kind of Tubey Magical Midrange that modern records can barely BEGIN to reproduce. Folks, that sound is gone and it sure isn’t showing signs of coming back. If you love hearing INTO a recording, actually being able to “see” the performers, and feeling as if you are sitting in the studio with the band, this is the record for you. It’s what vintage all analog recordings are known for — this sound.

The Moldau
A Night On Bald Mountain

Commentary on Les Préludes by Dr. Richard E. Rodda Les Préludes, the most popular of Liszt’s thirteen symphonic poems, had its beginning in 1844, when the composer met the French poet Joseph Autran in Marseilles at a banquet in Liszt’s honor. Within days, Liszt set one of Autran’s poems, Les Aquilons (“The Winds”), for mixed chorus and piano; this work was performed by a local chorus almost before the ink had dried. Liszt set three further of Autran’s poems – Les Flots (“The Oceans”), Les Astres (“The Stars”) and La Terre (“The Earth”) while on tour in Spain the following year. In 1848, Liszt, having made a study of orchestration during the intervening years, tried his new-found skill in an overture called The Four Elements to preface the quartet of vocal compositions set to Autran’s verses. Three years later (by which time the overture had been rechristened Symphonic Meditations), Autran sent Liszt his Poèmes de la Mer. Reading these verses recalled to Liszt his earlier pieces inspired by the poet and, referring to the overture and four choruses, he replied, “We will do something with it one fine day.” Between 1852 and 1854, Liszt, indeed, did something with it — he completely recomposed the overture as a symphonic poem, and presented it in 1854 under the title Les Préludes. During the revision process, Liszt discovered that a long, meditative poem by the French writer and statesman Alphonse de Lamartine evoked emotions similar to those he envisioned in his music. It was from the title of Lamartine’s poem – Les Préludes from the collection entitled Nouvelles méditations poétiques – that Liszt derived the name for his new work. Though the words have little more in common with the music than a general sharing of contrasting sentiments (love–war), Liszt chose to preface the published score with his prose interpretation of the original poem: What else is life but a series of preludes to that unknown hymn, the first and solemn note of which is intoned by Death? Love is the enchanted dawn of all existence; but what fate is there whose first delights of happiness are not interrupted by some storm, whose fine illusions are not dissipated by some mortal blast, consuming its altar as though by a stroke of lightning? And what cruelly wounded soul, issuing from one of these tempests, does not endeavor to solace its memories in the calm serenity of rural life? Nevertheless, man does not resign himself for long to the enjoyment of that beneficent warmth which he first enjoyed in Nature’s bosom, and when the ‘trumpet sounds the alarm’ he takes up his perilous post, no matter what struggle calls him to its ranks, that he may recover in combat the full consciousness of himself and the entire possession of his powers. Liszt was the originator of the “symphonic poem,” a one-movement orchestral composition whose music bears a relationship to a literary work, painting, historical event, legend, topographical feature or some other extra-musical stimulation. The symphonic poem, a genre later enthusiastically adopted by many other composers, is sectional in design, with frequent borrowing from such traditional forms as the sonata and rondo. Les Préludes loosely resembles a sonata form. It opens with a slow introduction which presents the work’s principal theme. Much of the music that follows grows from transformations of this germinal melody. The theme is presented in a bold, vigorous version by trombones to begin the sonata form proper, and is soon joined by a swaying, complementary melody sung by the horns. The “development” section contains sentiments first martial, then loving, and finally pastoral. The “recapitulation” is devoted mostly to the lyrical complementary theme. The brilliant coda, a grand, heroic transformation of the main theme again led by the trombones and tuba, brings Les Préludes to a stirring close.