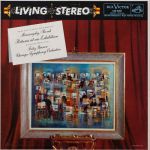 This TAS List record with a Super Hot stamper side one has some of the best sound we have ever heard for the Shaded Dog Reiner/CSO Pictures, and side two, although it starts out a little weak, gets going soon enough and earns a Super Hot Stamper sonic grade as well.

Side one is open and natural in the best Living Stereo tradition, with rich lower strings that have virtually no Golden Age smear.

Turn it up and listen for the big cymbal crashes — that’s the sound we love. It’s so good it even allows me to enjoy Reiner’s performance, never one of my favorites.

A++, transparent and free from smear, not many copies are going to beat this one! A little more top would have been nice.

Superb sound! The brass and strings on this part of the work are as good as it gets. No smearing of the brass — it’s clean and clear like it is in the concert hall. We’re so used to hearing it wrong that it takes a record like this to remind us how good a full brass choir can really sound.

It starts out about A+ (a bit hard and thin, like most copies of Scheherazade) but soon enough the sound improves to A++, becoming fuller and bigger with tons of depth. We are going to call it A+ to A++.

Listen to: The Market Place at Limoges

You have to hand it to the Chicago Symphony. They have the musical chops to play with the incredible precision and speed the piece requires. Not many orchestras could have pulled it off the way they have here.

Pictures at an Exhibition

As an orchestral showpiece – the form in which it is familiar to most listeners – Pictures at an Exhibition is two times over a work of enlargement. Moussorgsky’s original suite for piano, composed in 1874 as a memorial to the painter Victor Hartmann, took as its point of departure ten pictures displayed at a posthumous exhibition of the artist’s work. Though pianistically crude, Moussorgsky’s renderings of his friend’s images convey their rich fantasy with sincerity and great imaginative force. Ravel’s celebrated orchestration of Pictures at an Exhibition, undertaken in 1922 at the request of conductor Serge Koussevitzky, in turn faithfully amplifies both the wit and deep feeling of Moussorgsky’s tribute.

One is surprised, listening to the orchestral version, to discover that Hartmann’s originals were modest little sketches and watercolors. For example, the Ballet of Chicks in their Shells was inspired by a whimsical costume sketch for a children’s ballet. Moussorgsky had turned that into a lively scene painting, and Ravel’s scoring, with its clucking oboes and scurrying scale passages in the bassoon and strings, transforms the children in their eggshell costumes into real chicks.

The inspiration for The Hut on Fowl’s Legs came from a quaint design for a clock in the shape of cabin built on a chicken’s feet – the unlikely abode of the with Baba Yaga. Moussorgsky decided to portray the legendary hag’s frightful ride through the air. Ravel marshals the heavy brass and a business like array of percussion to create a thunderous chase.

In The Great Gate of Kiev, the most breathtaking and at the same time most touching part of the suite, Moussorgsky apostrophized his departed friend with a monumental realization of Hartmann’s lopsided, ornately decorated drawing of a city gate in the old Russian style, with a cupola in the shape of a helmet surmounting the gatehouse. Based on the theme Moussorgsky called Promenade – which opens Pictures at an Exhibition and is meant to depict the viewer’s passing from one work to the next – this finale was the composer’s way of saying farewell and, at least in music, giving substance to one of his friend’s fondest dreams. In Ravel’s hands, Moussorgsky’s vision of a gate that was never built becomes one of the architectural wonders of the world, magnificently brought to life by full brass, pulsing strings, pealing bells, and triumphant cymbals.