CTI – A Label We Love 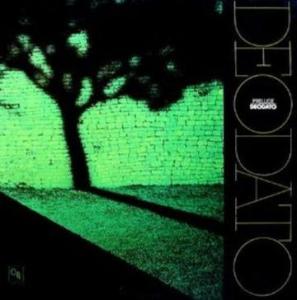 Both sides are surprisingly sweet and Tubey Magical, nice qualities for a CTI record to have since so many of them are aggressive and edgy to the point of distraction.

Listen to the trumpet on the second track on side one — it’s so immediate, it’s practically JUMPING out of the soundfield, just bursting with energy. Rudy can really pull off these big productions on occasion, and this session was clearly one of them. If you have the kind of stereo that’s right for this music (the bigger the better) you could easily find yourself using this record as a demonstration disc. It’s very unlikely your audiophile friends have ever heard anything like it.

The congas are present in the mix and very full-bodied — this allows them to really drive the rhythmic energy of the music. We know this because the copies with congas that were veiled or thin never seemed to get up go. The bass on these two sides was some of the best we heard as well.

The top is most often the problem with these CTI pressings. Both sides here seem to give you all the top end that was on the tape.

There is wonderful transparency and openness to the soundstage, as well as less congestion in the loudest parts. Also, Sprach (2001) is on side one of the album and it is killer here.

Full, lively horns; rich, punchy, smear-free congas; fuzzy fuzzed-out guitars; as well as correct tonality and Tubey Magic in every area of the spectrum, what’s not to love?

The best copies are so much bigger too. There is no doubt you will hear the difference immediately. If you do a shootout with your best copy and ours plan on it being over practically before it starts.

Dropping the needle on a random copy of Prelude early in 2009 we found ourselves pleasantly surprised by the sound. It was big, bold, spacious and extended up top. This is Rudy Van Gelder‘s work circa 1972 and that means it can be a whole lot better than many of the compressed-to-death, hard, sour and squawky recordings he made in the ’50s and ’60s.

Of course, he made plenty of great ones back then too, don’t get us wrong, but it seems that most audiophile reviewers don’t make much of an effort to distinguish the good ones from the bad ones. We’ve played plenty

What We’re Listening For on Prelude

as well as a large number of horns, woodwinds, violins, violas and cellos

We’ve been really digging these CREED TAYLOR productions for years now. On the better albums such as this one, the players tend to sound carefree and loose — you can tell they’re enjoying the hell out of these songs. Don’t get me wrong — we still love the Blue Note and Contemporary label stuff for our more “hard core” jazz needs, but it’s a kick to hear top jazz musicians laying down these grooves and not taking themselves so seriously… especially when it sounds as good as this copy does.

This Demo Disc Quality recording should be part of any serious Audiophile Jazz Collection, assuming you like jazz fusion. Others that belong in that category can be found here.

Baubles, Bangles and Beads
Prelude to Afternoon of a Faun
September 13

Prelude is the eighth studio album by Brazilian keyboardist Eumir Deodato, released in 1973. With the signature track “Also Sprach Zarathustra (2001)” (an arrangement of the theme from 2001: A Space Odyssey), Prelude would be the biggest hit Deodato and CTI Records ever had.

The album features guitarist John Tropea on three tracks, bassists Ron Carter and Stanley Clarke, and Billy Cobham on drums. The funk-influenced version of the “Introduction” from Richard Strauss’s Also sprach Zarathustra, entitled “Also Sprach Zarathustra (2001)”, won the 1974 Grammy Award for Best Pop Instrumental Performance and went to number two in the pop charts in the US, number three in Canada, and number seven in the UK.