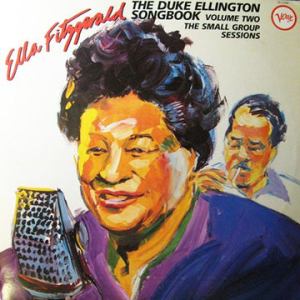 Ella is no longer a recording — she’s a living, breathing person. We call that “the breath of life,” and this record has it in spades. Her voice is so rich, sweet, and free of artificiality you cannot help but find yourself lost in the music, because there’s no “sound” to distract you.

Rich, smooth, sweet, full of ambience, dead-on correct tonality — everything that we listen for in a great record is here. You could certainly demonstrate your stereo with a record this good, even one that’s not nearly this good, because this one is superb.

What the Best Sides of the Duke Ellington Songbook, Vol. 2 Have to Offer Is Not Hard to Hear

This reissue is spacious, open, transparent, rich and sweet. It’s yet another remarkable disc from the Golden Age of Vacuum Tube Recording Technology, with the added benefit of mastering using the more modern cutting equipment of the early ’80s. We are of course here referring to the good modern mastering of 35+ years ago, not the dubious modern mastering of today.

Hey, we were as shocked as you are that a good record could still be cut in 1982 from 1957 tapes. The combination of old and new works wonders on this title as you will surely hear for yourself on these superb sides.

This has not been our experience with most of the reissues on Ella’s records. Most of the Polygram-era records sound very smeary and compressed, the sound of the second, third and fourth generation tapes that are surely made from.

But if you play enough of them — and we do — every once in a while you run into one as good as this!

What We’re Listening For on Ella’s Songbook Albums

The AMG review below is for the complete sessions on 4 LPs, originally released as two Double Album sets in 1957, from which these small group tracks were pulled and compiled into the later release we are offering here.

This 1957 effort is distinguished from Fitzgerald’s other songbooks in that it is the only album in which the composer whose work she is singing actively participates. In fact, these recordings are packed with some of the key figures in 20th century jazz. As if Ella and Duke weren’t enough, Ellington’s arranger/composer Billy Strayhorn, guest musicians Dizzy Gillespie and Oscar Peterson, and brilliant record producer Norman Granz all have a hand in the proceedings.

And what better backing band could one want than Duke’s orchestra? The usual suspects — Jimmy Hamilton, Johnny Hodges, Paul Gonsalves, Harry Carney, and Sam Woodyard, among others — contribute fine performances throughout. Duke’s spectacular catalog dazzles, and his sprightly, lush textures are transfigured under Fitzgerald’s warm-timbred voice and elegant, precise delivery. Included here are classics like “Rockin’ in Rhythm,” “Caravan,” “Satin Doll,” “Sophisticated Lady,” “Prelude to a Kiss,” and “It Don’t Mean a Thing…,” each tune as familiar as it is delightful to hear in this new context.