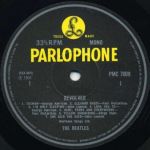 A great sounding record in stereo, potentially anyway, but this later reissue in mono is so awful it deserves a special place in our Hall of Shame.

My notes for side one: hard, sour, no bass.

We love the mono mix of For No One, but not when it sounds like this! The only Beatles vinyl we offer on our site are stereo pressings. Our reasons for doing this are straightforward enough.

The Beatles records in mono, contrary to the opinion of audiophiles and music lovers alike, virtually never have the presence, energy and resolution found on the best stereo copies. If your stereo cannot resolve all the information on the tape, sure, Twin Track Stereo (used on the first two albums, hard-panned multi-track afterwards) ends up sounding like some of the instruments are stuck in the speakers, hard left and hard right, with nothing but a hole in the middle.

But there is a great deal of information spreading into the middle when we play those records here, and nothing feels stuck in the speakers that doesn’t sound like it was supposed to be heard coming directly from one of the speakers.

We can tell you this potentially helpful piece of information about Revolver pressings: no original Yellow and Black British pressing has ever fared well in a shootout we’ve conducted. The better your stereo gets, the more bandwidth-limited, distorted, compressed and congested the originals will reveal themselves to be. 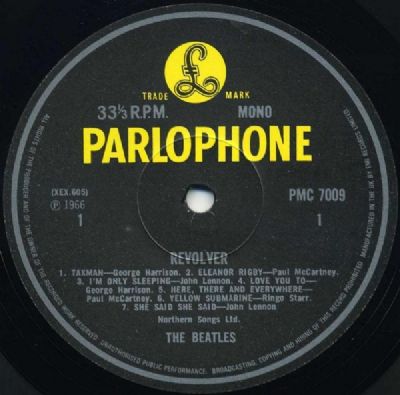