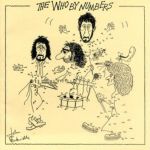 With Doug Sax mastering from the real tape, you get a Rock Solid Bottom End like you will not believe. Talk about punchy, well-defined and deep, man, this record has BASS that you sure don’t hear too often on rock records.

And it’s not just bass that separates the Men from the Boys, or the Real Thing from the Classic Reissue for that matter. It’s WEIGHT, fullness, the part of the frequency range from the lower midrange to the upper bass, that area that spans roughly 150 to 600 cycles.

It’s what makes Daltry’s voice sound full and rich, not thin and modern.

It’s what makes the drums solid and fat the way Johns intended.

The good copies of Who’s Next and Quadrophenia have plenty of muscle in this area, and so do the imports we played.

But not the Classic. Oh no, so much of what gives Who By Numbers its Classic Rock sound has been equalized right out of the Heavy Vinyl reissue by Chris Bellman at BG’s mastering house.

Some have said the originals are warmer but not as detailed. I would have to agree, but that misses the point entirely: take out the warmth — the fullness that makes the original pressings sound so right — and you of course hear more detail, as the detail region is no longer masked by all the stuff going on below it.

Keep that in mind when they tell you at the store that the record you brought in to audition is at fault, not their expensive and therefore “correct” equipment. I’ve been in enough of these places to know better. To mangle another old saying, if you know your records, their excuses should fall on deaf ears.

More on the Classic

The Classic is not a bad record. It has better extension up top than any copy we played, and mostly sounds correct, albeit in a modern way. If you’re not too particular and are looking for a copy for around thirty bucks, it’s hard to fault. If you have a modest stereo system by all means buy the Classic; what the originals do better is not going to be easy for a modest system to reproduce. It takes piston power and a seriously treated room, both of which are expensive and hard to achieve.

RECORDS THAT ARE GOOD FOR TESTING