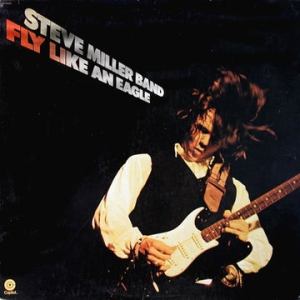 On this copy, you get richness and warmth, front and center immediacy, extension up top and down low, and loads of energy. The synths have texture, the guitars are full-bodied and the bottom end is nice and meaty.

The soundfield is especially open and transparent, with three-dimensional space that brings out the trippy effects the band threw in all over the place. When they sound this good, they really work some Seventies Analog Magic.

This Capitol pressing has the kind of Tubey Magical Midrange that modern records rarely even BEGIN to reproduce. Folks, that sound is gone and it sure isn’t showing signs of coming back. If you love hearing INTO a recording, actually being able to “see” the performers, and feeling as if you are sitting in the studio with the band, this is the record for you. It’s what vintage all analog recordings are known for — this sound.

What We’re Listening For On Fly Like An Eagle

We consider this Steve Miller record his Masterpiece. It’s a recording that should be part of any serious popular Music Collection.

Steve Miller had started to essay his classic sound with The Joker, but 1976’s Fly Like an Eagle is where he took flight, creating his definitive slice of space blues.

The key is focus, even on an album as stylishly, self-consciously trippy as this, since the focus brings about his strongest set of songs (both originals and covers), plus a detailed atmospheric production where everything fits. It still can sound fairly dated — those whooshing keyboards and cavernous echoes are certainly of their time — but its essence hasn’t aged, as “Fly Like an Eagle” drifts like a cool breeze, while “Take the Money and Run” and “Rock ‘n Me” are fiendishly hooky, friendly rockers…

Though it may not quite transcend its time, it certainly is an album rock landmark of the mid-’70s and its best moments (namely, the aforementioned singles) are classics of the idiom.