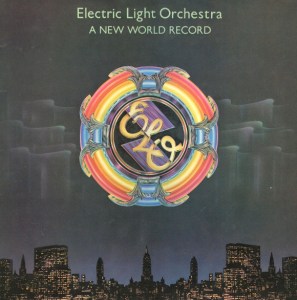 Even though I am not the world’s biggest ELO fan, I am a HUGE fan of this album, which is why I’m so happy to have finally found one with AMAZING SOUND, on both sides! The British originals are the only ones that can convey the sweet TUBEY MAGIC of the British Master Tapes. The string tone on the average domestic copy is shrill and smeary; too little of the critically important texture remains after the master tapes have been dubbed and the copies sent to America for mastering.

As a result of Jeff Lynne’s everything-but-the-kitchen-sink production approach, it’s the rare copy that provides enough transparency and resolution to bring out all the elements in these incredibly dense mixes, strings included. For audiophiles, ELO on LP doesn’t get any better.

Love those female background singers — their voices are clear and individually separated, but even more importantly, on the best copies like this one they are ENTHUSIASTIC. This is the very definition of a Hot Stamper: ELO on this copy is full of life and energy. The average copy is just another ELO record, like most of them Dead On Arrival.

What We’re Listening For On A New World Record

And I have never heard a CD in my life with this kind of tubey magical richness and sweetness. That medium never does justice to the sound of recordings like this one, in my experience anyway. People who exclusively play CDs have forgotten what that sound is; that’s why they can happily live without it. I sure can’t. At present, this sound is exclusively the domain of analog and likely to remain so well into the future.

This is, in my humble opinion, the band’s MASTERPIECE. Others that belong in that category can be found here.

Both sides start off with a uptempo rocker, and this side’s is Tightrope.

Watch your string tone. If it’s shrill or grainy you are going to find yourself in trouble on practically every song on A New World Record — they all have strings and lots of them.

You need richness in the lower mids, harmonic extension up top, and just plain highly resolving sound if the strings are going to sound right in the mix.

Note that sometimes the highs get better on a record as it plays. Check to see if you don’t have more top end by the second track, or even halfway through this one. Happens to us all the time.

My single favorite ELO song of all time. Full of emotion and beautifully produced. Lynne is the master of this kind of material.

Allmusic raves: “Telephone Line might be the best Lennon-McCartney collaboration that never was, lyrical and soaring in a way that manages to echo elements of Revolver and the Beatles without ever mimicking them.”

The side gets off to a good start with this rocker.

Another monster smash single that still holds up.

Written in 1971 for The Move, this is the arrangement that made it a hit.

Jeff Lynne reportedly regards this album and its follow-up, Out of the Blue, as the high points in the band’s history. One might be better off opting for A New World Record over its successor, however, as a more modest-sized creation chock full of superb songs that are produced even better. Opening with the opulently orchestrated “Tightrope,” which heralds the perfect production found throughout this album, A New World Record contains seven of the best songs ever to come out of the group. The Beatles influence is present, to be sure, but developed to a very high degree of sophistication and on Lynne’s own terms, rather than being imitative of specific songs. “Telephone Line” might be the best Lennon-McCartney collaboration that never was, lyrical and soaring in a way that manages to echo elements of Revolver and the Beatles without ever mimicking them. The original LP’s second side opened with “So Fine,” which seems like the perfect pop synthesis of guitar, percussion, and orchestral sounds, embodying precisely what Lynne had first set out to do with Roy Wood at the moment ELO was conceived. From there, the album soars through stomping rock numbers like “Livin’ Thing” and “Do Ya,” interspersed with lyrical pieces like “Above the Clouds” (which makes striking use of pizzicato bass strings).