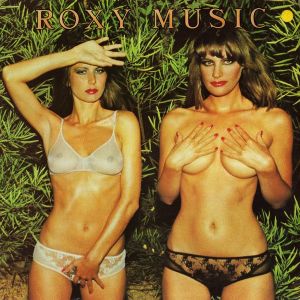 Many of the best songs Bryan Ferry ever wrote and Roxy Music ever played are on this album. Musically it’s right up there with the first album and Siren. All three represent the high watermark of early- to mid-’70s Arty Rock.

These British pressings give you the richest, fullest, biggest sound with the least amount of sibilance, grain and grunge. It’s the rich, full-bodied ANALOG sound — with some problems to be sure — that we adore here at Better Records.

We thank John Punter for his engineering and production at George Martiin’s legendary AIR Studios.

This recording has always had at least some harshness associated with it. Since every copy of this album (including multiple versions of the CD) has that characteristic I think it’s fair to say it’s on the tape. The best copies have the least and the worst copies tend to have the most, everything else being equal.

The domestic, German, Japanese and Dutch pressings are not remotely competitive with the Brits on this album (which is not true for all Roxy’s albums but clearly true for this one, Siren being the obvious exception to the rule).

Now for those of you who are not big Roxy Music fans and don’t know this music, this album may take a bit of getting used to. We assure you it will be well worth your while. We think it’s brilliant.

And if you do consider yourself a fan of Art Rock, every Roxy album should be on your shelf, right up there with your Bowie, Pink Floyd, Supertramp, Eno, Peter Gabriel, 10cc and too many others to list. (Most are personal favorites of mine, albums I have played hundreds of times over the last 40 years and plan to keep playing until my ears give out.)

The Thrill of It All
Three and Nine

On the best copies this track is the very definition of Tubey Magical richness and smoothness.

All I Want Is You

A little thinner and brighter than the other tracks on this side as a rule.

Out of the Blue

The best guitar solo ever played on the violin. Go Eddie!

If It Takes All Night

The best copies have monstrous bass on this track, along with huge amounts of space. Again, the Tubey Magic can be off the charts here.

The vocals on this track will always spit to some degree. The cleanest, most tonally correct sibilance is what you are looking for on this track. That, and amazing rock energy!

Continuing with the stylistic developments of Stranded, Country Life finds Roxy Music at the peak of their powers, alternating between majestic, unsettling art rock and glamorous, elegant pop/rock. From the sleek rock of ‘All I Want Is You’ and ‘Prairie Rose’ to the elegant, string-laced pop of ‘A Really Good Time,’ Country Life is filled with thrilling songs, and Roxy Music rarely sounded as invigorating as they do here.

I consider Roxy to be one of the greatest Art Rock bands in the history of the world. Although the general public and probably most audiophiles would surely cast their vote for Avalon as the band’s masterpiece, I much prefer the music of these others — their eponymous first album, Stranded, Country Life and Siren — to the more “accessible” music found on Avalon.