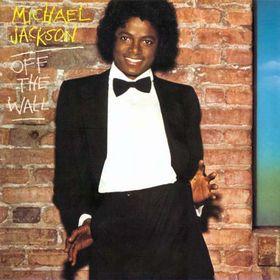 Normally when you have a copy with plenty of presence, it can be somewhat sibilant in places. Sibilance is hardly a problem here. For some reason this copy has all the highs, but it’s cut so clean it practically doesn’t spit at all. Even on the song I Can’t Help It, which normally has a problem in that respect. Since that’s my favorite song on this album, and probably my favorite MJ song of all time, hearing it sound so good was a revelation.

The richness, sweetness and freedom from artificiality is most apparent on Off the Wall where you will most always hear it on a pop record: in the biggest, loudest, densest, most climactic choruses.

We set the playback volume so that the loudest parts of the record are as huge and powerful as they can possibly grow to be without crossing the line into distortion or congestion. On some records, Dark Side of the Moon comes instantly to mind, the guitar solos on Money are the loudest thing on the record. On Breakfast in America the sax toward the end of The Logical Song is the biggest and loudest sound on the record, louder even than Roger Hodgson’s near-hysterical multi-tracked screaming “Who I am” about three quarters of the way through. Those are clearly exceptions though. Usually it’s the final chorus that gets bigger and louder than anything else.

A pop song is often structured so as to build up more and more power as it works its way through its verses and choruses, past the bridge, circling back around to make one final push, releasing all its energy in the final chorus, the climax of the song. On a good recording — one with real dynamics — that climax should be louder and more powerful than everything that came before it.

It’s almost always the toughest test for a pop record, and it’s the main reason we play our records loud. The copies that hold up through the final choruses of their album’s largest scaled productions are the ones that provide the biggest thrills and the most emotionally powerful musical experiences one can have. Our Top 100 is full of the kinds of records that reward listening at loud levels.

To bring this discussion back to the subject at hand, the loudest choruses on Off the Wall are richer, smoother, sweeter and more free of processing than those on Thriller.

One might be tempted to put forth the proposition that as Michael and engineer Bruce Swedien continued their collaboration with Bad (1987) and Dangerous (1991, without the phenomenally talented Quincy Jones), the sound got progressively worse — phonier and more mechanized, not unlike pop music in general. I would not want to be the ideal choice to make that case though, if only because I’ve spent so little time listening to either album.

However, I’ve played Off the Wall and Thriller by the score, and been powerfully moved by the energy and beauty of the best sounding copies for more years than I can remember. Having listened critically to so many copies of the two albums, I feel safe in saying that Off the Wall is clearly the better recording.

What We’re Listening For on Off The Wall

Without getting too far into the weeds with the sound of select tracks (commentary which we’ve just added to the Track Listing), we’ll simply state for the record that this is a much better-sounding album than Thriller will ever be, no matter how hot the stamper.

To back up our case we note that on side one:

Rock With You has some of the richest, smoothest, sweetest, most ANALOG sound on the entire album. There is no track on Thriller that sounds as Tubey Magical, assuming you have a top-quality pressing.

On side two we discuss the merits of the first track, Off The Wall:

One despairs for the digital-only music lovers of the world. They will never be able to experience a top quality pressing of Off the Wall in analog.

The Tracklist tab above will take you to a select song breakdown for each side, with plenty of What to Listen For advice.

It should be big, clear and lively right out of the gate.

The balancing act to the first track, Rock With You has some of the richest, smoothest, sweetest, most ANALOG sound on the entire album. There is no track on Thriller that sounds as Tubey Magical, assuming you have a top quality pressing.

As is always the case with rich and smooth sound, transparency is key. The sound should not be thick and dark, it should be both rich and clear.

Don’t Stop ‘Til You Get Enough gets hot in the higher frequencies with the volume cranked. Rock With You is just the opposite; the louder you play it the better — the more right — it sounds from top to bottom.

Working Day and Night
Get on the Floor

The top end at the start of a side is sometimes lacking so pay attention to see if more top end can be heard later on in the song.

Watch for smear on the horns. They are rich and smooth and on some copies their transient bite will get blurry.

Girlfriend can achieve the status of a top Demo track on the better copies, no question about it. Turn it up to hear some of the biggest, tightest, most note-like bass on the album. The best copies pull off that monstrous bottom end without bloat, while maintaining some of the loveliest, most tubey rich mids on the album.

On the better copies the stage is wide and the vocals as breathy as on any track on the album. Potentially the Demo Disc track of side two.

She’s Out of My Life
I Can’t Help It

Some of the richest, silkiest, breathiest vocals on the album can be found here, my personal favorite track from Off the Wall.

Nothing on Thriller — no matter how hot the stamper — has this sound. It is the rare recording from the ’80s, even the early ’80s, that can compete with the best of those from the ’50s, ’60s and ’70s. For those of us who play records by the thousands this is simply inarguable; the preponderance of evidence is so overwhelming that what might pass for a mere observation must rightly be seen as something much stronger, a fact.

One can only despair for the CD listeners of the world who will never experience a top quality pressing of this album in the original analog.

It’s the Falling in Love
Burn This Disco Out

Michael Jackson had recorded solo prior to the release of Off the Wall in 1979, but this was his breakthrough the album that established him as an artist of astonishing talent and a bright star in his own right. This was a visionary album, a record that found a way to break disco wide open into a new world where the beat was undeniable, but not the primary focus — it was part of a colorful tapestry of lush ballads and strings, smooth soul and pop, soft rock, and alluring funk.

Its roots hearken back to the Jacksons’ huge mid-’70s hit “Dancing Machine,” but this is an enormously fresh record, one that remains vibrant and giddily exciting years after its release. This is certainly due to Jackson’s emergence as a blindingly gifted vocalist, equally skilled with overwrought ballads as “She’s Out of My Life” as driving dancefloor shakers as “Working Day and Night” and “Get on the Floor,” where his asides are as gripping as his delivery on the verses.

It’s also due to the brilliant songwriting, an intoxicating blend of strong melodies, rhythmic hooks, and indelible construction. Most of all, its success is due to the sound constructed by Jackson and producer Quincy Jones, a dazzling array of disco beats, funk guitars, clean mainstream pop, and unashamed (and therefore affecting) schmaltz that is utterly thrilling in its utter joy.

This is highly professional, highly crafted music, and its details are evident, but the overall effect is nothing but pure pleasure. Jackson and Jones expanded this approach on the blockbuster Thriller, often with equally stunning results, but they never bettered it.