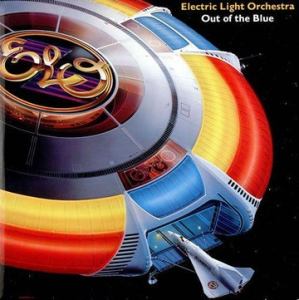 This Jet Records pressing has the kind of Tubey Magical Midrange that modern records rarely even BEGIN to reproduce. Folks, that sound is gone and it sure isn’t showing signs of coming back. If you love hearing INTO a recording, actually being able to “see” the performers, and feeling as if you are sitting in the studio with the band, this is the record for you. It’s what vintage all analog recordings are known for — this sound.

What the best sides of Out of the Blue have to offer is not hard to hear:

What We’re Listening For on Out of the Blue

Night in the City
Starlight
Jungle
Believe Me Now
Steppin’ Out

The last ELO album to make a major impact on popular music, Out of the Blue was of a piece with its lavishly produced predecessor, A New World Record, but it’s a much more mixed bag as an album. For starters, it was a double LP, a format that has proved daunting to all but a handful of rock artists, and was no less so here. The songs were flowing fast and freely from Jeff Lynne at the time, however, and well more than half of what is here is very solid…

Out of the Blue was massively popular and did become the centerpiece of a huge worldwide tour that earned the group status as a major live attraction for a time.

Side 3: Concerto for a Rainy Day

Side three of the release is subtitled Concerto for a Rainy Day, a four track musical suite based on the weather and how it affects mood change, ending with the eventual sunshine and happiness of “Mr. Blue Sky”. This was inspired by Lynne’s experience while trying to write songs for the album against torrential rain outside his Swiss Chalet. “Standin’ in the Rain” opens the suite with a haunting keyboard over a recording of real rain, recorded by Jeff Lynne just outside his rented studio. Also heard at the 30 second point of the song marking the beginning of The Concerto is thunder crackling in an unusual manner voicing the words “Concerto for a Rainy Day” by the band’s keyboardist, Richard Tandy. At around the 1 minute mark the staccato strings play a morse code spelling out ELO. The band used the song to open their 1978 Out of the Blue concerts.

“Big Wheels” forms the second part of the suite and continues with the theme of the weather and reflection. Apart from its inclusion on the Out of the Blue album, the song has never appeared on any of the band’s compilations or as a B-side until 2000, when Lynne included it on the group’s retrospective Flashback album. “Summer and Lightning” is the third song in the suite. The raining weather theme is continued throughout the track though the mood and lyrics are more optimistic. “Mr. Blue Sky”, an uplifting, lively song celebrating sunshine, is the finale of “Concerto for a Rainy Day” suite. It is the only piece from the Concerto to be excerpted as a single.

The album had 4 million pre-ordered copies and quickly went multi-Platinum upon release. Out of the Blue spawned five hit singles in different countries, and was ELO’s most commercially successful studio album. It was also the first double album in the history of the UK music charts to generate four top twenty hit singles. Lynne considers A New World Record and Out of the Blue to be the group’s crowning achievements, and both sold extremely well, reaching multi-platinum according to RIAA Certification.

Capital Radio and The Daily Mirror Rock and Pop Awards (forerunner to The Brit Awards) named it “Album of the Year” in 1978. Lynne received his first Ivor Novello award for Outstanding Contributions to British Music the same year.