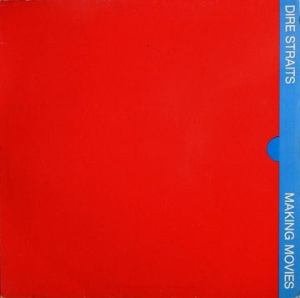 The music really comes together, especially if you’ve been playing a sub-generation domestic pressing, which is the only kind Warners made as far as we know. (The first album is the same way of course.) Here you will find richer mids, sweeter highs, more energy and some real punch down low.

Most copies of Making Movies tend to be dry, spitty, grainy, and somewhat dull, robbing the music of much of its charm. These guys obviously know their way around a studio — many of you must know just how good their first album can sound — so we’ve always been frustrated at what we heard on copy after copy that hits out table.

Fortunately, there are indeed wonderful sounding pressings out there, and here’s one that backs up that statement big time.

What We’re Listening For on Making Movies

Without second guitarist David Knopfler, Dire Straits began to move away from its roots rock origins into a jazzier variation of country-rock and singer/songwriter folk-rock. Naturally, this means that Mark Knopfler’s ambitions as a songwriter are growing, as the storytelling pretensions of Making Movies indicate.

Fortunately, his skills are increasing, as the lovely “Romeo and Juliet,” “Tunnel of Love,” and “Skateaway” indicate. And Making Movies is helped by a new wave-tinged pop production, which actually helps Knopfler’s jazzy inclinations take hold…