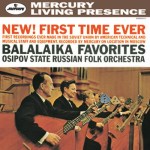 What else is new?

Here are a few commentaries you may care to read about Bernie Grundman‘s work as a mastering engineer, good and bad.