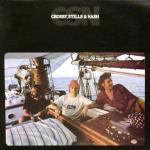 The problem with the sound cannot be “fixed” in the mastering, and here’s how we know: on either side some songs have the breath of life and some don’t. That’s a recording problem.

It sounds like too many generations of tape were used on songs like Shadow Captain and Dark Star, among others.

But Just a Song Before I Go on side two can sound wonderful: rich, sweet, present and surrounded by lovely studio ambience.

So we listen for the qualities of a specific song that help us pinpoint what the best copies do well and the rest do poorly and grade them accordingly, on a curve.

Animals will never sound like The Wall. You do the best you can with what you’ve got to work with.

CSN’s albums live or die by the quality of their vocals, a subject we have discussed on the site at length.

CSN was the trio’s last fully realized album, and also the last recording on which the three principals handled all the vocal parts without the sweetening of additional voices. It has held up remarkably well, both as a memento of its time, and as a thoroughly enjoyable musical work.