More of The Moody Blues 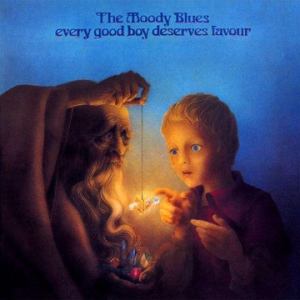 This copy had the BIG, RICH, LUSH British sound that can only be heard on the very best Moody Blues pressings.

Great-sounding Moody Blues albums don’t show up on our site too often — they’re just not that easy to come by.

Dull, veiled, boring sound is the rule, and big, rich, CLEAR sound like this the exception.

This vintage Threshold pressing has the kind of Tubey Magical Midrange that modern records can barely BEGIN to reproduce. Folks, that sound is gone and it sure isn’t showing signs of coming back. If you love hearing INTO a recording, actually being able to “see” the performers, and feeling as if you are sitting in the studio with the band, this is the record for you. It’s what vintage all analog recordings are known for — this sound. If you exclusively play modern repressings of vintage recordings, I can say without fear of contradiction that you have never heard this kind of sound on vinyl. Old records have it — not often, and certainly not always — but maybe one out of a hundred new records do, and those are some pretty long odds.

The soundfield is BIG, WIDE, and DEEP — exactly what you what for these big production songs with layers upon layers of musical ideas. When the various parts don’t have room to breathe, your copy is in TROUBLE. The bass is deep and punchy, the vocals are full-bodied and breathy, and the amount of ambience around the instruments is exquisite. You’re going to have a hard, painful time trying to find better sound for this album than you’ll hear on these two sides.

Three Qualities To Listen For

Achieving just the right balance of Tubey Magical, rich but not too rich “Moody Blues Sound” is no mean feat. You had better be using the real master tape for starters. Then you need a pressing with actual extension at the top, a quality rarely found on most imports. Finally, good bass definition is essential; it keeps the bottom end from blurring the midrange. No domestic copy in our experience has ever had these three qualities, and only the best of the imports manages to combine all three on the same LP. Every Moody Blues record is going to sound a bit murky and muddy; that’s obviously the kind of sound that these guys were going for. On anything but a Hot Stamper pressing, the result is going to be a fat, turgid, thick sounding record that is impossible to penetrate. When you find one like this, you can begin to understand what the band was going for, and the best moments are pure Moody Blues MAGIC.

No Sacrifice Necessary — You Can Have It All

With the best pressings all the clarity and resolution comes without sacrificing the Tubey Magical richness, warmth and lushness for which the Moody Blues recordings are justifiably famous. I’m not kidding — the best pressings present this music in a way that no previous LPs of it that we’ve ever played could. Some are so correct from top to bottom, so present and alive, while still retaining all the richness and sweetness we expect from British Moody Blues records, that I find it hard to believe you can do any better, in this life anyway. Some copies manage to take the Moodies’ wonderful music to another level. They are the very definition of a Hot Stamper.

The best-realized of their classic albums, Every Good Boy Deserves Favour was also the last of the group’s albums for almost a decade to be done under reasonably happy and satisfying circumstances — for the last time with this lineup, they went into the studio with a reasonably full song bag and a lot of ambition and brought both as far as time would allow… Sad to say, the group would never be this happy with an album again — at least not for a lot of years — or with their commitment to being a group, though they would leave one more highly worthwhile album before taking a hiatus for most of the rest of the 1970s.