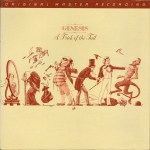 Not long ago I played the MoFi pressing of Trick of the Tail and could not believe how ridiculously COMPRESSED it was.

On top of that, the midrange is badly sucked out (as is the case with most Mobile Fidelity pressings) making the sound as dead, dull and distant as can be.

You think Modern Heavy Vinyl pressings are lifeless? Play this piece of crap and see just how bad an audiophile record can sound.

And to think I used to like this version! I hope I had a better copy back in the ’80s than the one I played a few years ago. I’ll never know of course. If you have one in your collection give it a spin. See if it sounds as bad as we say. If you haven’t played it in a while (can’t imagine why, maybe because it’s just plain awful), you may be in for quite a shock.