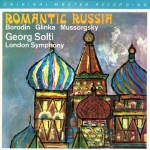 If a self-styled Audiophile Reviewer cannot hear the obvious faults of this pressing, I would say there’s a good chance one or both of the following is true:

But is it really the worst kind? It seems to be the only kind!

MoFi had a bad habit of making bright classical records. I suppose you could say they had a bad habit of making bright records in general. A few are dull, some are just right, but most of them are bright in one way or another. Dull playback equipment? An attempt to confuse detail with resolution? Whatever the reasons, the better and more accurate your equipment becomes, the most obvious this shortcoming will be. My tolerance for their phony EQ is at an all time low. But hey, that’s me.

Describing the real London pressing, we wrote, “Huge scope — depth and width like you will not believe, perfect for this music. The voices in the chorus are clearly separated out and so big and rich! This side is open and sweet in the best Golden Age tradition. Smooth like live music — there’s no phony top here, unlike the MoFi, which is nothing but phony sound from top to bottom. What a joke they played on the audiophiles of the day.”

And now it goes for big money on ebay because some audiophile web pundit put it on his list of great recordings. Can you imagine having a list of great recordings that includes a MoFi pressing? That one entry renders the list risible, and the fact that no one has called this person on it is a sure sign that there are still far too many audiophiles who simply cannot or will not learn to listen for themselves.

It’s the SLAM factor in a recording that let’s you appreciate how much air these large orchestral instruments can really move when the piece calls for it, and of course these pieces do call for it, big time. Night on Bald Mountain especially. The concert hall is supposed to shake with the blasts of brass and tympanic beatings called for by Mussorgsky.

Note that it’s rare for a half speed mastered record to have deep solid bass. What their cutters manage for bass is never as tight, defined or note-like as the better real time cutters. We wrote about the subject in the track commentary for the song Deja Vu.

If I could indulge in some more MoFi and Half-Speed bashing for a moment, the bass “solo” at the end of this song is a great test for bass definition. The notes are relatively high, and it’s easy for them to sound blurred and wooly. The MoFi, like virtually all Half-Speed mastered records, has a problem with bass definition. If you own the MoFi, listen for how clearly defined the notes are at the end of this track. Then play any other copy, either of So Far or Deja Vu. It’s a pretty safe bet that the bass will be much more articulate. I know how bad the MoFi is in this respect. Rarely do “normal” records have bass this bloated and out of control.