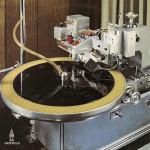 More of the Music of Lincoln Mayorga

I have to confess we were actually quite taken aback at the significant pressing variations on this famous record, the first Sheffield Direct to Disc recording.

Biggest problems on S9? I would have to say smearing is Number One. When the brass loses its bite and the bells don’t have the percussive quality of metal being struck, this is not a good thing. The band also seems to lose energy when the pressing suffers from smear.

Number Two would be a lack of top end extension. The harmonics of the sax and trumpet are muted on some copies, and the harpsichord really suffers when the top end isn’t all it should be. This lack of extension is most noticeable on all the lovely bells and percussion instruments that pepper the soundstage, but you can actually hear it on practically every instrument once you recognize the problem: guitar harmonics, cymbals and snares, and on down the list.

It gives you the LIFE and ENERGY of the music — the tonality of the instruments is correct (although admittedly some tracks can sound a bit dark. That’s not actually a pressing issue, it’s more of a mixing and mic’ing issue.) and the whomp factor is fully intact. This is what made the album such a Demo Disc in its day. It’s got real power and IMPACT from the deepest bass up through the lower midrange, that range that small speakers and screens have so much trouble with. (The Legacy Focus we use for our shootouts has three twelve inch woofers and LOVES records with this kind of WHOMP.)

Above the bottom you will find wonderfully transparent and sweet mids and highs. This is the kind of sound that brings out the breathy, reedy quality of the saxes that play on so many of the tunes here (alto, tenor and baritone, the full complement don’t you know).

We are big fans of Mayorga’s music for Sheffield from back in the day; all three of the Distinguished Colleagues records are fun and boast amazing sound when you get the right pressing. (We do Hot Stamper shootouts for all of them on a regular basis; it’s shocking how much better some copies sound compared to others. If you want the amazing sound that the Direct to Disc recording technology promises, we know of no other way to get it than by cleaning, playing and evaluating the discs themselves.)

Up, Up and Away
Mercy, Mercy
She’s Leaving Home
Don’t Think Twice
All The Things You Are

This Album Is Good for Testing the Following Qualities: