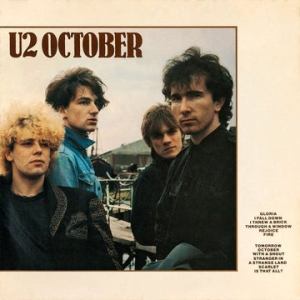 Recordings from the ’80s are always a bit tricky in terms of their sound quality, and U2 is not a band we have ever associated with the highest audiophile-quality sonics. We’ve been through a number of their albums now, including War, The Unforgettable Fire, and The Joshua Tree, and while Demo Quality Sound may never be in the cards for these guys, we’ve at least found a handful of pressings that do a much better job of communicating their music than others, and certainly a great deal better than any Heavy Vinyl reissue or digital source.

It’s not often that we come across audiophile-quality sound for U2’s early titles. The average copy of this record sounds as dry and flat as a cassette. Not this one, or to be more precise, not this pressing.

What We’re Listening For On October

For Big Production Rock Albums like October, there are some obvious problem areas that are often noticeable on at least one side of practically every copy we played.

Transparency, clarity and presence are key. The sides that had sound that jumped out of the speakers, with driving rhythmic energy, worked the best for us. They really brought this complex music to life and allowed us to make sense of it. This is yet another definition of a Hot Stamper — it’s the copy that lets the music work as music.

Tomorrow
October
With A Shout (Jerusalem)
Stranger In A Strange Land
Scarlet
Is That All?

Dave McCullough of Sounds praised the album and said: “A kind of zenith pop then, no half measures. It all breathes fire, recovering too from the pair of standouts appearing at the start of each side – ‘Gloria’ being possibly Their Finest Moment and ‘Tomorrow’, low and muted, gently oozing emotion”. McCullough concluded, “This October will last forever”.

Adam Sweeting of Melody Maker also wrote a favorable review, saying: “Their whole musical sensibility is shaped by a strong emotional bond to their homeland and its traditions. It gives them a completely different frame of reference from most groups, and on ‘October’ it’s given them the strength to assimilate a barrage of disorientation and to turn that into a cohesive body of music.”