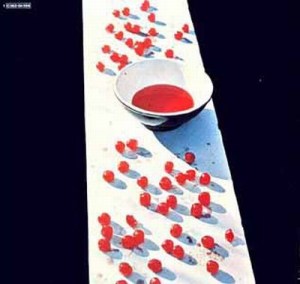 The best tracks here have the quality of LIVE MUSIC in a way that not one out of a hundred rock records do. The music jumps right out of the speakers and fills up the room.

The best tracks here have the quality of LIVE MUSIC in a way that not one out of a hundred rock records do. The music jumps right out of the speakers and fills up the listening room.

The album sounds like it’s recorded live in the studio, but of course that’s impossible, because Paul plays practically all the instruments himself! It just goes to show how good a multi-track studio recording can sound when done well.

This album, like Unplugged and Band on the Run (and not a whole lot else), is SUPERB from start to finish. At the end of side two, you want MORE. I wish I could say that about the rest of his discography.

What We’re Listening For On McCartney’s Masterpiece

It’s practically impossible to find clean copies of this album that sound good. We went through a big pile of our best copies this week and eventually found the sound (and surfaces) we were looking for. I can’t tell you how many copies we had to toss because they were noisy, had marks that played (minor ones on side 2 aside), weak sonics, or suffered from all three shortcomings.

This Guy Liked It a Lot Too

“I loved that record because it was so simple. And there was so much to see and to hear. It was just Paul. There was no adornment at all … There was no attempt made to compete with the things he had already done. And so out he stepped from the shadow of the Beatles.”

Neil Young inducting Paul McCartney into the Rock and Roll Hall of Fame in 1999.

The distorted guitar in a huge and reverberant room that leads off this side is one of my favorite “sounds” on any McCartney album. The bigger, richer and grungier it sounds the better.

This is a very tough track to get right. There is processing on Paul’s voice that some copies make a mess of, adding a kind of unpleasant resonance, which of course the better copies do not.

It’s a fairly simple arrangement: acoustic guitar, bass, voice and Linda’s backing vocals. When all of these things are in balance, the sound will be lovely. Paul’s voice, because of the processing I mentioned, doesn’t sound as natural as it does on other tracks, but it shouldn’t be irritating or disagreeable.

Another exceptionally hard track to get right. On a top copy the guitar solo will JUMP right out of your speakers. It should have the energy of LIVE MUSIC

Although for years shunned and treated as the devil’s plastic, for ostensibly shattering The Beatles’ dream, Paul McCartney’s first solo album is never less than charming. While Lennon and Harrison were busy making their point and Ringo was busy recording pub singalongs, McCartney released this naive template for his solo career: some blinding songs; some stoned noodles; and some frankly embarrassing tosh.

Recorded during the end of 1969 at home in London’s St. John’s Wood, McCartney feels wistfully undercooked — a deliberate reaction to the somooth veneers of The Beatles’ swansong, Abbey Road. After all the recent tension of working with the group in the studio, here McCartney worked alone, overdubbing on his Studer four-track recorder with a lone microphone.

The album is full of the touches that both enthrall and infuriate about McCartney. His two Beatles leftovers display these extremes perfectly: whereas “Junk” is wistful, poetic, and vivid, “Teddy Boy” is painfully silly. However, the whole album rests in the shadow of “Maybe I’m Amazed,” which arrives late and effortlessly demonstrates just how much an architect of the Abbey Road sound he was. A mature adult love ballad, it is possibly his finest song ever.

Released in April 1970, the album received sniffy reactions from the media, but quickly topped the American charts and reached the runner-up position in the UK. With its symbolic cover and snapshots of his new family, McCartney was not so much a willful post-Fab nose-thumbing as a manifesto of his intent and a catalog for his new life.

McCartney is better than the Beatles’ newest, Let It Be, better than the Beatles together. Which is, after all these years both a sad and an instructive thing to observe. Paul plays all the instruments — drums, bass, lead, rhythm, piano — and has in effect become the Beatles in himself, incorporating everything, including possibly the personalities of the other three. His sound is the Beatles still, and that is poignant, because the rest of them are not there, and maybe never will be.

Paul’s exhibiting some of the most together sounds any of the Beatles have ever put together. He is still innocent, charming, touching, lyrical, sympathetic, wistful, sad, longing, elfish, and poignant, But he is no longer a Beatle, just a damn fine musician and writer. His drum solo on “Hot As Sun,” accompanied by heavy breathing, is work for him, an effort but which in the end comes very naturally. Very heavy head record, too. “Maybe I’m Amazed” is incontestably the love ballad of all time.

The Word Is Out

We have been touting McCartney’s first solo album for more than a decade. Ever read a word about it in an audiophile context elsewhere?

Of course you haven’t. The audiophile world doesn’t know and doesn’t care about great albums like this one, but we at Better Records LIVE for albums with sound and music of this caliber. It’s a permanent resident of our Top 100 List for a reason: no other solo album by a Beatle can touch it.

As for surface issues, we wish we could find them quiet, but that is simply not an option, especially considering how dynamic the recording is. We’ve used every trick in the book to try to get copies of this album to play Mint Minus, but it’s not usually in the cards. Maybe I’m Amazed, in particular, seems to be noisy on nine copies out of every ten. If you’re looking for a copy without any surface noise, you’re probably better off tracking down the DCC Gold CD, which is actually quite good.

But no CD is ever going to sound like our record, not now, not ever. This is where I simply can’t understand how the typical audiophile can make the tradeoff for flat, average sound with quiet vinyl — the sound of these Heavy Vinyl reissues that have sprouted up all over the place, each one worse than the last — and the wonderful, but slightly noisy, sound to be found on the best originals.

Of course the obvious answer is that it is simply too much work to find enough original copies to clean and play in order to come across that needle in a haystack: the Hot Stamper pressing.