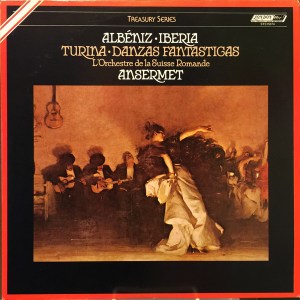 The sound of this copy is so transparent, undistorted, three-dimensional and REAL, without any sacrifice in solidity, richness or Tubey Magic, that we knew we had a real winner on our hands as soon as the needle hit the groove.

We were impressed with the fact that it excelled in so many areas of reproduction. The illusion of disappearing speakers is one of the more attractive aspects of the sound here, pulling the listener into the space of the concert hall in an especially engrossing way.

This vintage London pressing has the kind of Tubey Magical Midrange that modern records can barely BEGIN to reproduce. Folks, that sound is gone and it sure isn’t showing signs of coming back. If you love hearing INTO a recording, actually being able to “see” the performers, and feeling as if you are sitting in the studio with the band, this is the record for you. It’s what vintage all analog recordings are known for —this sound.

These sessions were recorded in Geneva’s glorious Victoria Hall. Released in 1960, CS 6194 is yet another remarkable disc from the Golden Age of Vacuum Tube Recording.

As a piano series in four books, this suite is Albéniz’s outstanding accomplishment, featuring complex playing techniques, bright modern harmonies, and imitations of instruments such as the guitar and castanets. In this transcription of five of the 12 “impressions” for orchestra by E. Fernández Arbós, many fascinating timbral elements are added to and amplified from the piano score.

“Evocación” (Evocation, 1906) opens with a bright Spanish chord consisting of a guitar-like string pizzicato, timbales, triangle, and high winds. Transposed to the key of A minor from the original A flat minor (intonation and certain figures are considerably easier for the orchestra in A minor), a plaintive English horn delivers the sad, haunting triple meter melody before it is passed on to other woodwind instruments. The expansive high strings are supported by pulsing horns and rich arpeggios which completely realizes something at which the pianist can only hint. Arbós adds new Debussy-inspired textures with tremolo strings and fast runs.

“La Fête Dieu à Séville” (“El Corpus en Sevilla”/Corpus Christi in Seville, 1906) is a celebratory minor-key tune that builds to fiery emotion. Arbós brilliantly accomplishes the difficult transfer of the unique piano figures to the orchestra (for example, quick two-hand alterations are reinterpreted by repeated pedal point on the open A string, or by tremolos in the violins). This makes for some exciting, brightly sparkling impressionist textures. Calmer and slower English horn and flute melodies are then accompanied by softly undulating muted Debussyian string timbres. The final Vivo section re-ignites the energy in triple meter. The ending has bell-like sounds bringing back a religious aspect following the celebration.

“Triana” (1906) is a dance with a graceful, spirited, lilting rhythm with daring harmonic modulations and combinations which calls for an expanded percussion section including timbales, triangle, Basque drum (Pandereta), cymbals, small tambour, tubular bells, and celesta, and like the typical Debussy orchestra, calls for two harps and an expanded wind section.

“El Puerto” (The Port, 1906), in a joyous 6/8 meter, contrasts brusque punctuations with a happy folk dance melody and with “subtle and caressing” sighing figures. Arbós adds many glissandi, quick trills and turns, and mid-range wind and brass sustains (replacing some of the sustaining pedal and resonance capabilities of the piano).

“El Albaicín” (1907), the name of a gypsy quarter in Granada, unfolds in a lively angular dance rhythm with a melancholy sweetness and bold harmonies.

In contrast to his friend and fellow composer Manuel de Falla (six years older), Turina was less interested in mainstream European music and continued to write in the rich, colorful Andalusian style which most often is associated with Spanish music. Danzas fantásticas is a brilliant, wholly Spanish piece and Turina’s best-known work (there is also a piano version).