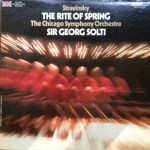 Reviews and Commentaries for the Music of Stravinsky

This is a VERY old and somewhat embarrassing commentary providing the evidence for just how Wrong We Were about the sound of Solti’s 1974 recording for Decca.

This is an amazing recording, DEMO QUALITY SOUND, far better than the Decca heavy vinyl reissue that came out in the 2000s. [That part is no doubt true.]

This record is extremely dynamic; full of ambience; tonally correct; with tons of deep bass. Because it’s a more modern recording, it doesn’t have the Tubey Magic of some Golden Age originals, but it compensates for that shortcoming by being less distorted and “clean.” Some people may consider that more accurate. To be honest with you, I don’t know if that is in fact the case.

However, this record should not disappoint sonically and the performance is every bit as exciting and powerful as any you will find. The Chicago Symphony has the orchestral chops to make a work of this complexity sound effortless.

Skip forward to the present, roughly ten years later. We had three or four copies on hand to audition when we surveyed the work a couple of years ago in preparation for a big shootout. 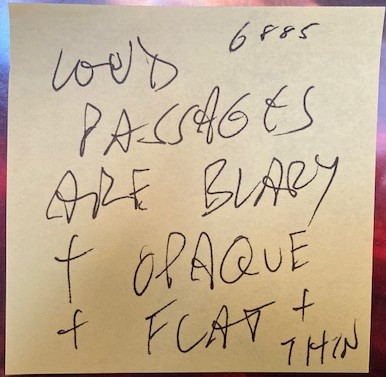 The Solti did not make the cut. It was not even in the ballpark.

Our reasons are laid out in the post-it note you see to the left. We had three or four copies and even the best one still had the shortcomings you see listed, just to a lesser degree. (For more on the subject of opacity on record, click here and here.)

So in the eleven or twelve years from the time we played a pile of copies in 2008, to 2020 or thereabouts when we auditioned a new batch, this recording seems to have gotten a lot worse.

But that’s not what happened. We’re under no illusions now that the album did not always have these sonic shortcomings, shortcomings that existed from the day copies came off the presses in England, some with London labels, others with Decca labels.

We simply did not have the cleaning system or the playback system capable of showing us what was wrong with their sound, and how much better other recordings were than they were.

In 2008 I had been seriously involved with the audio hobby for more than 30 years. I had been an audiophile record dealer for more than twenty by then. I thought I knew what I was talking about. Clearly I had a lot to learn.

This is, once again, what progress in audio in all about. As your stereo improves, some records should get better, some should get worse. It’s the nature of the beast for those of us who constantly make improvements to our cleaning and playback and listen critically to records all day.