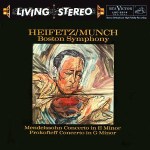 A Hall of Shame pressing and another Classic Records Classical LP debunked.

Classic Records ruined this album, as anyone who has played some of their classical reissues should have expected. Their version is dramatically more aggressive, shrill and harsh than the Shaded Dogs we’ve played, with almost none of the sweetness, richness and ambience that the best RCA pressings have in such abundance.

In fact their pressing is just plain awful, like most of the classical recordings they remastered, and should be avoided at any price.

Apparently, most audiophiles (including audiophile record reviewers) have never heard a top quality classical recording. If they had, Classic Records would have gone out of business immediately after producing their first three Living Stereo titles, all of which were dreadful and labeled as such by us way back in 1994. I’m not sure why the rest of the audiophile community was so easily fooled, but I can say that we weren’t, at least when it came to their classical releases.

(We admit to having made plenty of mistaken judgments about their jazz and rock, and we have the We Was Wrong entries to prove it.)

Classic Records has officially gone under. They will not be missed, not by us anyway, except for this reason: to borrow a line from Richard Nixon, I guess we won’t have Classic Records to kick around anymore. We’ve been beating that dead horse since the day they started making records back in 1994. There are scores of commentaries on the site about their awful records for those who are interested.

The last review we wrote for the remastered Scheherazade, which fittingly ended up in our Hall of Shame, with an equally fitting sonic grade of F.

Which of course begs the question of what actually is a good record — what it is that makes one record good and another bad — but luckily for you dear reader, you are actually on a site that has much to say about those very issues.

With an Old School System you will continue to be fooled by bad records, just as I and all my audio buds were fooled twenty and thirty years ago. Audio has improved immensely in that time. If you’re still playing Heavy Vinyl and Audiophile pressings, there’s a world of sound you’re missing. We would love to help you find it.

One amazing sounding  Orchestral Hot Stamper pressing might just be what it takes to get the ball rolling.