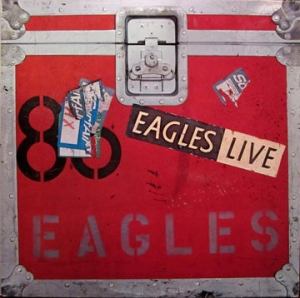 What’s magical about The Eagles? Their voices of course, what else could it be? It’s not a trick question. They conquered the charts with their genius for harmony. Any good pressing must sound correct on their voices or it has no value whatsoever. An Eagles record with mediocre sound in the midrange — like many of them — is to us a worthless record.

When you drop the needle on a copy with gritty, spitty, lean, congested vocals, give up and move on. You have a bad pressing and no amount of cleaning or adjusting of the table is likely to fix it.

What We’re Listening For on Eagles Live

Hotel California
Heartache Tonight
I Can’t Tell You Why

The Long Run
New Kid in Town
Life’s Been Good

When it comes to live music, most bands fail. The Eagles, however, sound even better when playing live. Don Felder is in my opinion the most naturally gifted guitar player of all times. I include Hendrix and Clapton and others as comparisons. Much has been made of the well documented in fighting between members of the Eagles. This should not invalidate their achievements. Hotel California is iconic, every track in this album is epic. The Eagles, the band that shaped not just one generation but continue to do so. This is a must have for fans of the Eagles, it does not get much better than this offering.