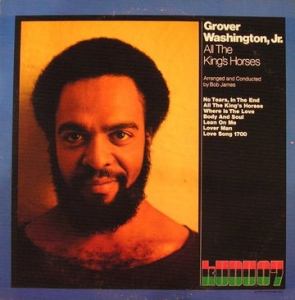 But not us. We’ve played the very special pressings that prove the album can sound amazing.

What We’re Listening For on All The King’s Horses

The sound we most often find on original pressings (the only ones that ever sound any good; the later pressings are awful) is full of compression, and suffers as well from the kind of high-frequency restriction that prevents the top end from extending in a harmonically correct way. The result: Grover’s horn often will take on a somewhat sour quality. Our better Hot Stampers are both uncompressed and open up top.

I’ve been a big fan of this record since I first heard it all the way back in High School. I only found out later that this is not what most people would consider “real” jazz — it’s CTI jazz, more in the pop jazz or soul jazz vein. But I love the music more with each passing year and would not hesitate for a moment to recommend it to any jazz lover or audiophile. If the first track doesn’t knock you out, this album may not be for you. Without a doubt, in my book it’s the best thing Grover Washington ever did.

The really good RVG jazz pressings sound shockingly close to live music — uncompressed, present, full of energy, with the instruments clearly located and surrounded by the natural space of the studio. As our stereo has gotten better, and we’ve found better pressings and learned how to clean them better, his “you-are-there” live jazz sound has begun to impress us more and more.

A Must Own Soul Jazz Record

We consider this Grover Washington, Jr. album his Masterpiece.

No Tears, In The End
All The King’s Horses
Where Is The Love
Body And Soul (Montage)

Grover Washington, Jr.’s sophomore date for Creed Taylor’s Kud imprint was released in late 1972. Like its predecessor Inner City Blues, this session was produced by the label boss himself and was arranged and conducted by Bob James. Assembled for the date were large horn and string sections. The former contained stalwart talents like Detroit’s Pepper Adams on baritone saxophone, and trumpeters Marvin Stamm and Ernie Royal. Other players on the session included what would become the heart of the CTI session crew: guitarists Cornell Dupree and Eric Gale, bassists Ron Carter and Gordon Edwards (who only appears on the opening cut), drummer Idris Muhammad (though Billy Cobham is also here), and percussionists like Airto Moreira and Ralph MacDonald. The real star of course is the soloist.

Washington’s debut, Inner City Blues, had done surprisingly well — especially since it was a date originally intended for Hank Crawford who couldn’t make the scene. This time out, both Taylor and James played to Washington’s tremendous strengths as an emotional player whose melodic improvising referenced everything from Motown to Stax and Volt, from Ray Charles to early James Brown and the Fabulous Flames, to Donny Hathaway, who had an uncanny knack with current pop hits. James too was discovering his own strengths in this field as a pianist and really shines behind Washington on tracks like “Where Is the Love,” (written by MacDonald, actually), and Bill Withers’ “Lean on Me.”

Washington was equally versed on both tenor and alto, and possesses two very different tones on the horns. This gave James the opportunity to color the tunes with a rather startling array of colors, shades, and textures, making the two a wonderful team. Along with the aforementioned winners are the title track by Aretha Franklin with the slow, deep blue saxophone lines accompanied by hand percussion, a tight snare and hi-hat kit rhythm, and James ghostly chords on the Fender Rhodes. But the large backdrop of horns lends so much weight to the tune it almost breaks wide open.

Then there’s the gorgeous — and radical-re-envisioning of “Body and Soul,” as a montage illustrated wonderfully by James impressionistic strings and woodwinds underneath Washington’s bluesy take on the melody. The standard “Lover Man” is reintroduced here and includes a new interlude written by James. Washington’s playing on the tune is actually reminiscent of Crawford’s in feel (during his time with Ray Charles), but Washington also evokes Ben Webster in the chances he takes improvising on his solo. As if all this weren’t adventurous enough, the set closes with “Love Song 1700,” an adaptation from a song by classical composer Henry Purcell. Here is the genius of James at work. His love for Purcell and classical composition of this era shows up throughout his career, but the way he orchestrates strings and winds behind Washington — who could inject pure soul into even the dullest music of Lawrence Welk — is provocative, lovely, and haunting, even in its more overblown moments.

When All the King’s Horses was originally released, it wasn’t received as well as Inner City Blues had been the previous year. In retrospect, however, this set has assumed its proper place in Washington’s catalog: as one of his more ambitious and expertly performed sessions.