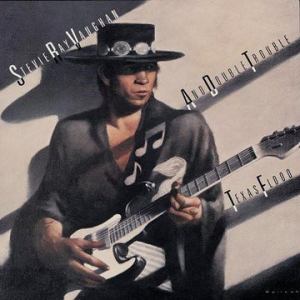 This copy gets Stevie’s room-filling guitar to sound about as rich and powerful as a recording of it can. When playing this record, first make sure the volume is up good and high. Now close your eyes and picture yourself in a blues club, with the volume ten times louder than your stereo will play. Electric Blues played at loud levels in a small club would sound pretty much like this album does, a bit messy but also real.

If you’re one of those audiophiles who insists on proper soundstaging with layered depth and pinpoint imaging, forget it. That’s not in the cards. The producers and engineers were going for the “live in the studio” sound with this one (and most of his other albums it seems), which means it’s a jumble image-wise.

But that’s the way you would hear it performed live, so where’s the harm?

What We’re Listening For On Texas Flood

It’s hard to overestimate the impact Stevie Ray Vaughan’s debut, Texas Flood, had upon its release in 1983. At that point, blues was no longer hip, the way it was in the ’60s. Texas Flood changed all that, climbing into the Top 40 and spending over half a year on the charts, which was practically unheard of for a blues recording. Vaughan became a genuine star and, in doing so, sparked a revitalization of the blues… Sometimes the borrowing was overt, and other times subtle, but it all blended together into a style that recalled the past while seizing the excitement and essence of the present.

Vaughan and Double Trouble had performed at the Montreux Jazz Festival in July 1982 and caught the attention of musician Jackson Browne. He offered the band three days of free use in his Los Angeles recording studio. During Thanksgiving weekend, they accepted Browne’s offer and recorded a demo. It was heard by record producer John H. Hammond, who had discovered artists such as Aretha Franklin, Bob Dylan, and Bruce Springsteen among many others. He presented the demo to Greg Geller, head of A&R at Epic Records, and arranged a recording contract.

Since the first day of production largely involved setting up equipment, Texas Flood was recorded in two days. In early 1983, subsequent to the band’s signing with Epic, they were given an advance of $65,000 to re-master the recordings. Vaughan’s vocals were recorded at Riverside Sound in Austin, Texas. The album was mixed and mastered in New York City. The recordings were released as Texas Flood in June 1983.

Bassist Tommy Shannon recalls of the sessions, “It really was just a big warehouse with concrete floors and some rugs thrown down. We just found a little corner, set up in a circle looking at and listening to each other and played like a live band. Vaughan used two Fender Vibroverbs and an 150-watt Dumbleland Special owned by Browne. Engineer and co-producer Richard Mullen says of his production techniques:

Just one mic on everything. I used two Shure SM57s on his guitar amps—one on a Fender Vibroverb with a 15-inch Altec Lansing speaker, and one on a Dumble 4×12″ bottom (with Electro-Voice speakers) connected to a Dumble head. Stevie played through two Vibroverbs, but I only miked one of the speakers in one of them. I positioned the mics about three or four inches off the cabinet at about a 45 degree angle to the cone. The only effect he used was an Ibanez Tube Screamer.