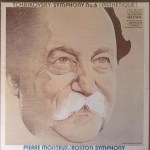 This review and commentary was written in 2011. It still holds up though — wouldn’t change a thing.

Presenting a first for Better Records: a White Hot Stamper copy of this CORRECTLY remastered version of LSC 1901, which just happens to be a recording from the earliest days of stereo, 1955! It’s guaranteed to KILL any and all original Shaded Dogs, as well as the more common reissues; White Dogs, Red Seals, Victrolas, Classic Heavy Vinyl, you name it, this pressing will beat the pants off of it and in the process show you precisely what is wrong with each and every one of them.

Over the past twenty years we’ve played hundreds of early RCAs and we have sure never heard one sound like this, with so much richness, Tubey Magic, LIFE and CLARITY.

Where is the cutter head distortion, congestion and frequency limiting that ruins so many of the early pressings?

Mostly — I’m tempted to say completely — gone. We’ve played at least three Shaded Dogs of LSC 1901 since 2011 and all three were AWFUL.

This copy is cut clean, its dynamics intact, which just goes to show how much better the master tape must be than we’ve been led to believe by the original Shady Dogs and the hacks at Classic Records.

The lower strings are especially textured and rich. That’s the Living Stereo sound we love!

This was by far one of the most natural sounding classical recordings we’ve played in months. Not many classical White Hot stampers come our way, and fewer still make it to the site. We hope whoever buys this record has a large classical collection so that he can see why we think this pressing belongs in the rarefied stratosphere of the All Time Greats.

But RCA managed to cut this record amazingly well decades after the tape was first recorded, not for audiophiles, but for music lovers. Maybe that’s the secret.

Of course it is. Records made for audiophiles are rarely any good, so rarely that we are shocked when such a record is even halfway decent. After playing so many bad records for so many years it’s practically a truism here at Better Records.

A record like this is the perfect example of why we pay no attention whatsoever to the bona fides of the disc, but instead make our judgments strictly on the merits of the pressing at hand.

“Buoyant vigor tempered with tender lyricism mark this performance as first-rate…” wrote The American Record Guide, and we could not agree more.

Tchaikovsky’s Sixth Symphony is forever associated with the tragedy of his sudden death. In the last year of his life, 1893, the composer began work on a new symphony. Sketches dated from as early as February, but progress was slow. Concert tours to France and England and the awarding of a doctorate of music from Cambridge cut into the time available for composition. Thus, though Tchaikovsky could compose quickly when the muse was with him, it was not until the end of August that he was able to complete the Sixth Symphony. Its premiere, with the composer himself on the podium, was given in St. Petersburg two months later, on October 28. The work seemed unusually somber, particularly in its finale that, both in tempo and dynamics, fades into nothingness.

Tchaikovsky’s brother Modest suggested at the time that the work ought to be called by the French word “pathetique,” meaning melancholy, and Tchaikovsky supposedly agreed, but if Modest or anyone else bothered to ask the reason behind the symphony’s gloomy mood, Tchaikovsky’s answer is lost to time. His only remembered comment about the new piece is, “Without exaggeration, I have put my whole soul into this work.

Not sure where I got this, perhaps wikipedia or the liner notes.