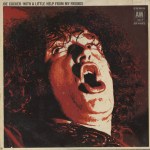 More of the Music of Joe Cocker

We just finished our first shootout in over FIVE [2012 or so] years for the album and were SHOCKED by how amazing the best copies can sound, even better than we remember them from last time around. Turn this one up good and loud and you’ll have Joe Cocker in all his raspy glory belting out With A Little Help From My Friends right in your very own listening room!

Blue-Eyed Soul doesn’t get much better than this. Cocker and his band chose SUPERB material for this album, including Dave Mason’s Feelin’ Alright; two of Dylan’s best, Just Like A Woman and I Shall Be Released; and of course the wonderful title track by no less than Joe’s fellow Brits Lennon and McCartney. The backing band features many great musicians including giants such as Jimmy Page and Stevie Winwood. No one’s making records like this anymore, not with this kind of musical and songwriting talent anyway. 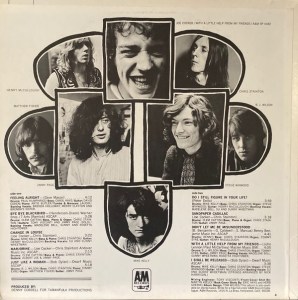 What’s surprising is how good all the not-so-famous musicians are here. Chris Stainton is killer on bass, piano and organ. (He later toured extensively with Eric Clapton.) Henry McCullough (who joined Wings in 1971) handles the electric guitar duties so well (along with Jimmy Page and Albert Lee) that we would be hard pressed to say who turns in the better axe work on the album. (Some of these guys went on to become The Grease Band, but all of them had no trouble finding professional work with the best in the business.)

Whoever put this band together deserves our gratitude; they are playing with the Best of the Best and holding their own every step of the way. It was a thrill to hear the quality of the musicianship on this album; they sound like one of those great British bands that’s been together for years and finally got the chance to show off their chops.

This album sounds just like one of the better Aretha Franklin outings from the late ’60s, early ’70s, with Aretha ducking out and Joe taking her place at the mic. If you’ve heard one of our Hot Stamper Aretha records you know exactly what you’ll be getting here. The background vocalists, piano and organ are eerily similar. It’s pretty clear that her recordings were being used as a template for this album, and it seems to have worked out very well for everyone involved. There is really nothing to fault here; the arrangements, the performances and the sound are GLORIOUS.

We played a large number of copies in our shootout and found that the average copy just didn’t cut it. They tend to be overly smooth with no real extension up top. Some are grainy and spitty, with edgy background vocals. It’s the Hot copies that split the difference — smooth and sweet in the upper mids, with an extended top end, but without sacrificing the all-important texture and presence in the vocals. If Cocker’s voice isn’t front and center and raspy as all get out, what’s the point?

We used to recommend and sell the Speakers Corner German pressing of the album, one of the few Heavy Vinyl pressings we carried up until a few years ago. It’s a good value at $35 but obviously would not hold a candle to one of our Hot Stamper original pressings. (The domestic reissues on the later A&M label are not to our liking and should probably be avoided.)

With a Little Help From My Friends is the major triumph of rock interpretation thus far. Cocker’s material leans to the conventional … but his conception and performance, as well as Denny Cordell’s production, are always audacious.

His transformation of “Bye Bye Blackbird” and “A Little Help From My Friends” from light-hearted ditties into wails of human need succeeds perfectly, and his version of ‘Feelin’ Alright’ is not only better than Three Dog Night’s but better than the original, by Dave Mason and Traffic.

If that means Cocker is the best singer in England, well—overlook Mick Jagger and it’s possible, even likely. His voice is very strong, influenced by Ray Charles, and he has no inhibitions about using it. All of his inhibitions came before the fact, in the immense care that went into each track …

Cocker’s affection for rock is uniquely personalized. He is gruff and vulgar, perhaps a touch too self-involved, but his steady strength rectifies his excesses. He is the best of the male rock interpreters, as good in his way as Janis Joplin is in hers.