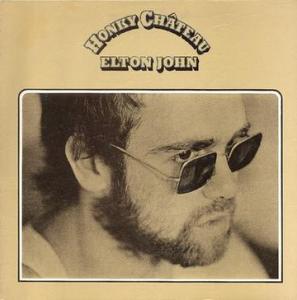 If you doubt that Elton John was an unusually gifted Pop Music Genius for much of the ’70s, just play this record. These eleven tracks should serve as all the proof you could possibly need. There’s not a dog in the bunch, and most of these songs are positively brilliant. Drop the needle on any track, you simply can’t go wrong.

Honky Chateau has to be one of the best sounding rock records of all time — certainly worthy of a prized spot on our Rock and Pop Top 100 List. It’s a shining example of just how good High-Production-Value rock music of the ’70s can be.

The amount of effort that went into the recording of Honky Chateau is comparable to that expended by the engineers and producers of bands like Supertramp, The Who, Jethro Tull, Ambrosia, Pink Floyd and far too many others to list. It seems that no effort or cost was spared in making the home listening experience as compelling as the recording technology of the day permitted.

The sides that had sound that jumped out of the speakers, with driving rhythmic energy, worked the best for us. They really brought this music to life and allowed us to make sense of it. This is yet another definition of a Hot Stamper — it’s the copy that lets the music work as music.

Big Production Tubey Magical British Rock just does not get much better than Honky Chateau.

We go years between shootouts for Honky Chateau. It’s beyond difficult to find clean British copies of this album with the right stampers, let alone copies that have Hot Stamper sound. Few albums we play are tougher for us to find with great sound and quiet vinyl. Most of the copies we buy from record dealers in England are noisy and only a fraction of them have the kind of sound that serious audiophiles are going to pay good money for.

What We’re Listening For on Honky Chateau

In 2008 I had the opportunity to hear Ken Scott speak the night before at an AES meeting here in Los Angeles. This is the man who recorded some of the All Time Great Rock Albums, the likes of Ziggy Stardust, The White Album, Crime of the Century, All Things Must Pass, Son Of Schmilsson, America’s debut … this is one seriously talented guy! (I won’t bore you by trying to recap his talk, but if it ever comes out on youtube or the like, you should definitely check it out. The Behind-The-Scenes discussion of these artists and their recordings was a thrill for someone like me who has been playing and enjoying the hell out of most of his albums for more than thirty years.)

Credit must also go to producer Gus Dudgeon for the full-bodied, rich, smooth, oh-so-analog sound of the best copies of this title. He’s recorded or produced many of our favorite albums here at Better Records, most notably the classic Elton Johns from the self-titled album onward. You can find many of them on our site and on our Top 100 list.

Honky Chateau is a rollicking collection of ballads, rockers, blues, country-rock, and soul songs. On paper, it reads like an eclectic mess, but it plays as the most focused and accomplished set of songs Elton John and Bernie Taupin ever wrote.

The skittering boogie of “Honky Cat” and the light psychedelic pop of “Rocket Man” helped send Honky Chateau to the top of the charts, but what is truly impressive about the album is the depth of its material. From the surprisingly cynical and nasty “I Think I’m Gonna Kill Myself” to the moving ballad “Mona Lisas and Mad Hatters,” John is at the top of his form, crafting immaculate pop songs with memorable melodies and powerful hooks…

It’s one of the finest collections of mainstream singer/songwriter pop of the early ’70s.

Big Rock Records such as this one always make for tough shootouts. Their everything-but-the-kitchen-sink approach to recording make it difficult to translate so much sound to disc. vinyl or otherwise. Everything has to be tuned up and on the money before we can even hope to get the record sounding right. (Careful VTA adjustment could not be more critical in this respect.)

If we’re not hearing the sound we want, we keep messing with the adjustments until we do. There is no getting around sweating the details when sitting down to test a recording as complex as this. If you can’t stand the tweaking tedium, get out of the kitchen (or listening room as the case may be). Obsessing over every aspect of a record’s reproduction is what we do for a living. This kind of Big Rock Recording requires us to be at the top of our game, both in terms of reproducing the albums themselves as well as evaluating the merits of individual pressings.

After having critically auditioned a pile of Honky Chateau pressings it’s abundantly clear to us that our stereo system just plain loves this record. Let’s talk about why we think that might be.