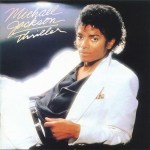 This commentary was written many years ago, probably in 2010, right around the time that Thriller really started to sound good, owing to advances we had made in cleaning and playback.

The sound on this copy is huge — big, wide, deep, and open, with the kind of three-dimensional soundstaging that lets the music unfold in front of you and around you as well. You get the bottom-end punch that’s so crucial to this music and tons of energy. The bass is meaty and well-defined, showing you the rhythmic foundation that the music needs. The sound is transparent with amazing texture to practically every element.