1992 – Yes, They Were Still Making Real Vinyl Records Then 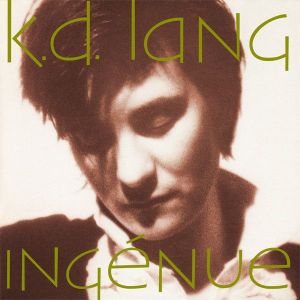 Be that as it may, we have this copy available and it is not only very good sounding but the music is every bit as good as I remember it.

This vintage Sire pressing has the kind of Tubey Magical Midrange that modern records can barely BEGIN to reproduce. Folks, that sound is gone and it sure isn’t showing signs of coming back. If you love hearing INTO a recording, actually being able to “see” the performers, and feeling as if you are sitting in the studio with the band, this is the record for you. It’s what vintage all analog recordings are known for — this sound.

What We’re Listening For on Ingenue

On her early albums, k.d. lang was a country traditionalist with a difference — while she had a glorious voice and could evoke the risen ghost of Patsy Cline when she was of a mind, there was an intelligence and sly humor in her work that occasionally betrayed her history as a performance artist who entered the musical mainstream through the side door. And while the three years between Absolute Torch and Twang and Ingénue were full of controversy for lang that may have encouraged her to seek out new creative directions (among other things, she came out as a lesbian and her outspoken animal rights activism alienated many fans in the C&W mainstream), the former album suggested lang had already taken her interest in country music as far as it was likely to go.

Ingénue presented lang as an adult contemporary artist for the first time, and if she felt any trepidation at all about her stylistic shift, you’d never guess after listening to the record; lang’s vocal style is noticeably more subtle on Ingénue than her previous albums, but her command of her instrument is still complete, and the cooler surroundings allowed her to emotionally accomplish more with less. lang’s songwriting moved into a more impressionistic direction with Ingénue, and while the literal meanings of many of her tunes became less clear, she also brought a more personal stamp to her music, and the emotional core of “Save Me,” “Constant Craving,” and “So It Shall Be” was obvious even when their surfaces were evasive.

And the production and arrangements by lang and her longtime collaborators Ben Mink and Greg Penny were at once simple and ambitious, creating a musical space that was different in form and effect than her previous albums but one where she sounded right at home. Ingénue disappoints slightly because while lang was a masterful and thoroughly enjoyable country singer, she was a far more introspective adult contemporary singer/songwriter who seemingly demanded the audience accept her “as is” or not at all. However, the craft of the album is impressive indeed, and few artists have reinvented themselves with as much poise and panache as lang did on Ingénue.