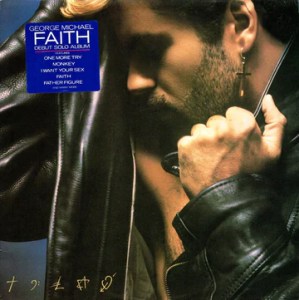 This vintage import Epic pressing has the kind of Tubey Magical Midrange that modern records can barely BEGIN to reproduce. Folks, that sound is gone and it sure isn’t showing signs of coming back. If you love hearing INTO a recording, actually being able to “see” the performers, and feeling as if you are sitting in the studio with the band, this is the record for you. It’s what vintage all analog recordings are known for — this sound.

Rock in the Eighties

For Big Production Rock Albums such as this there are some obvious problem areas that are heard on one or both sides of practically any copy of Faith.

With so many heavily-produced instruments crammed into the soundfield, if the overall sound is at all veiled, recessed or smeared — problems common to 90+% of the records we play in our shootouts — the mix quickly becomes congested, forcing the listener to work too hard to separate out the elements of musical interest.

Transparency, clarity and presence are key. Note that none of the British copies we played was excessively thin. (Unlike the domestic copies — they are clearly made from dubs and lack the richness only found on the imports.) Most had a fair amount of Tubey Magic and bass, so thankfully that was almost never a problem.

However, many did lack top end extension and transparency to some degree, and many were overly compressed. The sides that had sound that jumped out of the speakers, with driving rhythmic energy, worked the best for us. They really brought this complex music to life and allowed us to make sense of it.

This is yet another definition of a Hot Stamper — it’s the copy that lets the music work as music.

What We’re Listening For on Faith

A superbly crafted mainstream pop/rock masterpiece, Faith made George Michael an international solo star, selling over ten million copies in the U.S. alone as of 2000. Perhaps even more impressively, it also made him the first white solo artist to hit number one on the R&B album charts. Michael had already proven the soulful power of his pipes by singing a duet with Aretha Franklin on the 1987 smash “I Knew You Were Waiting (For Me),” but he went even farther when it came to crafting his own material, using sophisticated ’70s soul as an indispensable part of his foundation.

Of course, it’s only a part. Faith’s ingenuity lies in the way it straddles pop, adult contemporary, R&B, and dance music as though there were no distinctions between them. In addition to his basic repertoire of funky dance-pop and airy, shimmering ballads, Michael appropriates the Bo Diddley beat for the rockabilly-tinged title track, and proves himself a better-than-decent torch singer on the cocktail jazz of “Kissing a Fool.” Michael arranged and produced the album himself, and the familiarity of many of these songs can obscure his skills in those departments — close listening reveals his knack for shifting elements in and out of the mix and adding subtle embellishments when a little emphasis or variety is needed. …All of it adds up to one of the finest pop albums of the ’80s, setting a high-water mark that Michael was only able to reach in isolated moments afterward.