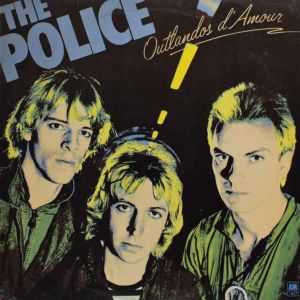 This is clearly one of the BEST copies of Outlandos d’Amour we have ever heard.

What We’re Listening For on Outlandos d’Amour

Next to You
So Lonely
Roxanne
Hole in My Life
Peanuts

While their subsequent chart-topping albums would contain far more ambitious songwriting and musicianship, the Police’s 1978 debut, Outlandos d’Amour (translation: Outlaws of Love) is by far their most direct and straightforward release.

Although Sting, Andy Summers, and Stewart Copeland were all superb instrumentalists with jazz backgrounds, it was much easier to get a record contract in late-’70s England if you were a punk/new wave artist, so the band decided to mask their instrumental prowess with a set of strong, adrenaline-charged rock, albeit with a reggae tinge.

Some of it may have been simplistic (‘Be My Girl-Sally,’ ‘Born in the ’50s’), but Sting was already an ace songwriter, as evidenced by all-time classics like the good-girl-gone-bad tale of ‘Roxanne,’ and a pair of brokenhearted reggae-rock ditties, ‘Can’t Stand Losing You’ and ‘So Lonely.’

But like all other Police albums, the lesser-known album cuts are often highlights themselves — the frenzied rockers ‘Next to You,’ ‘Peanuts,’ and ‘Truth Hits Everybody,’ as well as more exotic fare like the groovy album closer ‘Masoko Tanga’ and the lonesome ‘Hole in My Life.’

Outlandos d’Amour is unquestionably one of the finest debuts to come out of the ’70s punk/new wave movement.