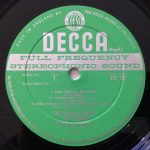 But not as good as the right later pressings with the Decca in a Box label, the ones that were produced from about 1970 on.

The Unboxed Decca pressing earned a Super Hot Stamper grade (A++). The later pressing, which seems to always have the same stamper, showed us just how good the album can sound.

Since the originals are pricey and hard to find, not to mention noisier than the later pressings as a rule, we don’t pick them up unless they are very cheap. They cannot win a shootout in our experience.

Not only is it hard to find great copies of this album, it’s hard to play them when you do find them. You’re going to need a hi-res, super low distortion front end to play this properly, but if you’ve got the goods this is one hot record! Play this with a budget cart / table / arm and you’ll hear very little of the magic that we heard.

This is some crazy music! If you’re looking for the raging bluesy rock of Sticky Fingers and Let It Bleed, you’ll find some of that here but also a lot of psychedelic madness. You get some great rockers though — Citadel, 2000 Man, and 2000 Light Years From Home to name a few. She’s A Rainbow is the poppiest song here, and on this copy it sounds WONDERFUL.

Without a doubt, no Rolling Stones album – and, indeed, very few rock albums from any era – split critical opinion as much as the Rolling Stones’ psychedelic outing. Many dismiss the record as sub-Sgt. Pepper posturing; others confess, if only in private, to a fascination with the album’s inventive arrangements, which incorporated some African rhythms, Mellotrons, and full orchestration. Never before or since did the Stones take so many chances in the studio. […]

In 1968, the Stones would go back to the basics, and never wander down these paths again, making this all the more of a fascinating anomaly in the group’s discography.

Sing This All Together
Citadel
In Another Land
2000 Man 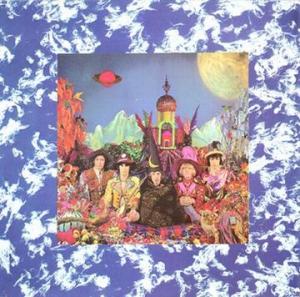