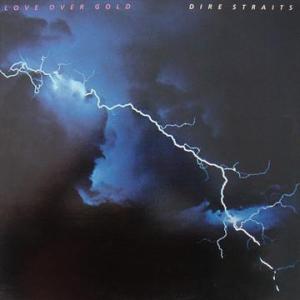 We pick up every clean copy we see of this album, domestic or import, because we know from experience just how good the best pressings can sound. What do the best copies have? REAL dynamics for one. And with those dynamics, you need rock solid bass. Otherwise, the loud portions simply become irritating.

Once you hear this Hot Stamper pressing, those 180 gram records you own may never sound quite right to you again. They sure don’t sound right to us, but we are in the enviable position of being able to play the best properly-cleaned vintage pressings (reissues included) side by side with the newer ones.

This allows the faults of the current reissues to become much more recognizable, to the point of actually being quite obvious. When you can hear the pressings that way, head to head, there really is no comparison.

What We’re Listening For on Love Over Gold

Adding a new rhythm guitarist, Dire Straits expands its sounds and ambitions on the sprawling Love Over Gold. In a sense, the album is their prog rock effort, containing only five songs, including the 14-minute opener “Telegraph Road.” Since Mark Knopfler is a skilled, tasteful guitarist, he can sustain interest even throughout the languid stretches…