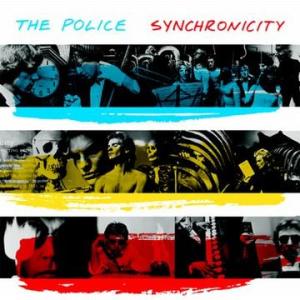 This music can have real Rock and Roll POWER — if you’re lucky enough to own a pressing with the energy of the master tapes inscribed in its grooves. Some have it and some don’t.

Welcome to the world of analog, where no two copies sound the same and most are nothing special. (No two covers of this album look the same either. Get a pile of them out and see if you can find two that match. It’s not easy.)

The sound on the best copies is meaty and punchy down low. More remarkable, the best pressings also come without the upper midrange boost on Sting’s vocals that would normally have you reaching to back off the volume. The choruses get LOUD and are so POWERFUL on the better copies that they make a mockery of most of the pressings we played.

I’ve been struggling with Synchronicity since it came out way back in 1983. It took a long time to get to the point where we could clean the record properly, twenty years or so, and about the same amount of time to get the stereo to the level it needed to be. It’s not easy to find a pressing with the low end whomp factor, midrange energy and overall dynamic power that this music requires, and it takes one helluva stereo to play a pressing with all those qualities too.

As we’ve said before about these kinds of recordings — Ambrosia; Blood, Sweat and Tears; The Yes Album; Dark Side of the Moon, Led Zeppelin II — they are designed to bring any audio system they come in contact with to its knees. If you have the kind of system that a record like this demands, you are going to hear some amazing sound when you drop the needle on these Hot Stampers.

What We’re Listening For on Synchronicity

Hugh Padgham Is The Man

If you have the right pressing this album can be a real sonic tour de force. Credit must go to producer and engineer Hugh Padgham, a man who’s worked with the likes of XTC, Phil Collins, Peter Gabriel, Genesis, Yes and Emerson, Lake & Palmer.

Those bands make the kind of music that make good use of Padgham trademark sound: wall-to-wall, deep, layered, smooth, rich and stuffed to the gills. The Police with Padgham’s help have here produced a real steamroller of an album in Synchronicity.

In the old days I didn’t care much for this album; it always sounded commercial in the worst sense of the word: thin, bright, pinched and compressed like a 45 single, perfect for FM radio but perfectly deadly on an audiophile turntable. I couldn’t get past the sound in order to hear the music. This version, however, is full-bodied, sweet, and transparent, just the way we like ’em.

Another example, if we needed one, of how the sound affects the ability of the listener to appreciate the music.

One of the two title tracks on this record (huh?), it’s also one of the quickest ways to hear what is happening sonically on this side. It’s a high energy, take-no-prisoners rock track that usually ends up sounding bloated and brittle on the typical pressing. However, when it’s cut right it’s amazing! The bass guitar and kick should be driving the track, not making you want to skip to the next one. Also, when you can hear the separation and detail in the multitrack army of Stings during the chorus, you’re in good shape.

Walking in Your Footsteps

Is that a pan flute I hear? More than likely it’s a synth, but if you can hear the “air” going through it and all of the ambience surrounding it, you’re not off to a bad start. Also, the percussion should actually sound like a drum and not like a stack of textbooks getting smacked.

The second title track on this album (ahhhh!) features a classic Andy Summers guitar intro that usually sounds much too midrangey but on the best pressings can actually have richness and body.

Every Breath You Take

Probably the most famous of all Police songs, the vocals are mixed way too loud for comfortable listening. However, the right copies prove that the dynamics can be controlled, even in the super-powerful bridge.

One of the more dynamic points on the album, the intro here is dark and alluring. The piano should be weighty and the upright bass should be full and clear.

Notice how silly the edit sounds right before the drums come in. Sting’s voice suddenly gets loud for no apparent reason, other than somebody spliced one piece of tape to another, tapes no one noticed were recorded at different levels, ouch.

That first snare hit should be an indication of what you’ve got. Hopefully it’s got body and attack to drive this track home.

Wrapped Around Your Finger
Tea in the Sahara

One of 1983’s biggest singles, the haunting “Every Breath You Take” is an obvious highlight, as well as other hits — the cacophonous rocker “Synchronicity II,” plus the far more temperate “Wrapped Around Your Finger” and “King of Pain”…

Few other albums from 1983 merged tasteful pop, sophistication, and expert songwriting as well as Synchronicity did, resulting in yet another all-time classic.

We raved about their pressing when it came out, noting that it was a huge improvement over the sound of the dreadful MoFi CD and the domestic vinyl pressings we had played. Our long-time customers may remember that we then did something we had never done before. Since so many copies of the Heavy Vinyl had noise issues, we cracked them open and played them to make sure they were quiet, the idea being that since they were already out of print the quiet ones would sell for much more money than the average noisy one.

To our shock and dismay we noticed that many copies of the album lacked bass, this on a record we had claimed finally had the bass that was missing from the domestic pressings! Ouch. Yes folks, even Heavy Vinyl pressings have Hot and Not So Hot Stampers. The ones with bass had their prices raised and the ones without had their prices lowered. The Proto-Hot Stamper had been born.

It wasn’t long after that we played a bunch of DCC Pet Sounds and noticed that no two of them sounded the same, that some were glorious and some were grainy and aggressive. Now one thing I can tell you about Steve Hoffman: grainy and aggressive is not his sound. Somewhere between his EQ notes and the finished record there was a problem. To this day nobody really knows exactly where the fault lies when a record comes out badly, but the lesson to be learned is to keep your ears open and just let the record speak for itself. It’s an approach we’ve been using for more than a decade. We can only hope that someday it catches on with the general audiophile public.