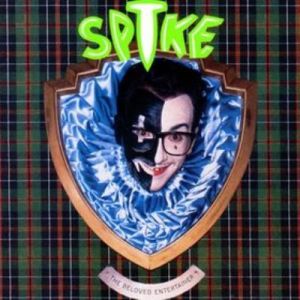 This vintage early British pressing has the kind of Tubey Magical Midrange that modern records can barely BEGIN to reproduce. Folks, that sound is gone and it sure isn’t showing signs of coming back. If you love hearing INTO a recording, actually being able to “see” the performers, and feeling as if you are sitting in the studio with the band, this is the record for you. It’s what vintage all analog recordings are known for — this sound.

Of course the sad truth of the matter is that most copies of this album don’t sound like this one! The same old problems rear their ugly heads again and again in these shootouts: sound that’s veiled, lacking presence; smeared; a lack of top or bottom end; a loss of transparency — the list of faults of so many records we play doesn’t change all that much from title to title.

But one like this makes you really sit up and take notice. These songs COME TO LIFE here in a very big way. Since this is one of the best batches of songs Elvis (and his buddy Paul McCartney) ever wrote, the combination of such good sound and such good music makes this the last of the great Elvis records from an audiophile perspective. You need this record. No collection is complete without it.

Some reviewers think that this sprawling album with widely diverse musical styles lacks focus, but that’s precisely what makes it a work of genius. Elvis Costello tries his hand at every style of pop music he can think of and succeeds brilliantly with each and every one of them. This is one of the few compelling albums of the ’80s. I still play mine regularly on CD in the car.

Any King’s Shilling on side two with its authentic Irish instrumentation (fiddle, uilleann pipes, Irish harp, bodhran) has Demo Disc Quality sound of the highest order. Another song on side two with top audiophile recording quality was Satellite. (For those of you who know Jellyfish, this has to be where they found some of the sound they would put to such good use on Bellybutton and Spilt Milk a few years later.

One side one God’s Comic is Demo Quality — so rich and natural. Where has this kind of sound gone? The way of the Dodo, baby, and it ain’t coming back. Mitchell Froom, the man who gave Crowded House such a polished pop sound, plays some wonderful keyboards here and elsewhere on the album. He’s joined by a slough of notables. Elvis searched far and wide for this group and managed to find top players for every position on his team. The musicianship is top drawer all the way. Elvis obviously knows talent when he hears it.

What We’re Listening For on Spike

This is one of the best sounding tracks Elvis Costello ever recorded. It represents the best of traditional English Folk music, the kind that was so well recorded by groups like Fairport Convention and Pentangle. Amazingly open, spacious, natural and fully present sound.