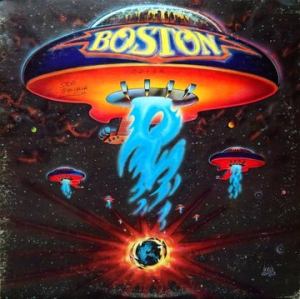 Boston’s first (and only good) album is a long-time member of our Top 100, and on a great pressing like this it’s easy to see why. It’s an incredible recording when you can hear it right, and this is about as right as it gets!

It’s obvious why the first Boston album became a Multi-Platinum Record. Practically every one of its songs still gets heavy radio play on every rock station in town. Consummately well-crafted music like this is almost impossible to find nowadays. I guess that’s why they call it Classic Rock.

The multi-tracked layers of guitars really come to life on the better copies. The not-so-great pressings tend to be congested and compressed, thickening the sound and diffusing the layers of multi-tracked harmonies. Tom Scholz’s uniquely overdriven, distorted leads have near-perfect timbre. On the top copies you can really hear how much power that sound adds to the music.

As is the case for best pressings of Aqualung, when the guitar sounds this good, it really makes you sit up and take notice of the guy’s playing. When the sound works the music works, our seven word definition of a Hot Stamper.

Our killer copies have sweetness and tubey warmth we didn’t expect to hear. Better yet, the best copies have jump-out-of-the-speakers presence without being aggressive, no mean feat.

The good ones make you want to turn up the volume; the louder they get the better they sound. Try that with the average copy. When playing mass-market pop-rock music like this, more level usually means only one thing: bloody eardrums.

The typical Boston EQ is radio-friendly, not audiophile-friendly. But some were cut right, with the kind of richness, sweetness and smoothness that we fondly refer to here at Better Records as The Sound of Analog.

The production techniques used on the late Brad Delp’s powerful vocals had to be implemented with the utmost skill and care or they would never have made the album the smash success that it is. His vocals are one of the great strengths of the album. You can be sure the producers and engineers knew that they had a very special singer in Brad and lavished their time and energy on getting his voice just right in the mix, making use of plenty of roomy analog reverb around both his multi-tracked leads and the background harmonies as well.

After hearing plenty of copies, one thing became clear — if the vocals don’t have good presence and breathy texture, you might as well be listening to the radio. Toss it onto the trade-in pile and move on. Brad really belts out those high notes; the right blend of clarity and weight is what lets his soaring vocals work their chart-topping magic.

The richness, sweetness and freedom from artificiality is most apparent on Boston where you most always hear it on a pop record: in the biggest, loudest, densest, most climactic choruses.

What We’re Listening For on Boston

Blasting the Wall of Sound

We consider this album Boston’s Masterpiece (and I bet everybody else does too).

More Than a Feeling
Peace of Mind
Foreplay/Long Time

Boston is one of the best-selling albums of all time, and deservedly so. Because of the rise of disco and punk, FM rock radio seemed all but dead until the rise of acts like Boston, Tom Petty, and Bruce Springsteen.

Nearly every song on Boston’s debut album can still be heard on classic rock radio today due to the strong vocals of Brad Delp and unique guitar sound of Tom Scholz. Tom Scholz, who wrote most of the songs, was a studio wizard and used self-designed equipment such as 12-track recording devices to come up with an anthemic “arena rock” sound before the term was even coined. The sound was hard rock, but the layered melodies and harmonics reveal the work of a master craftsman.

While much has been written about the sound of the album, the lyrics are often overlooked. There are songs about their rise from a bar band (“Rock and Roll Band”) as well as fond remembrances of summers gone by (“More Than a Feeling”).

Boston is essential for any fan of classic rock, and the album marks the re-emergence of the genre in the 1970s.