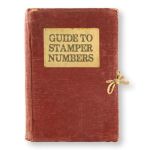 I received this email a while ago (a very long while ago as a matter of fact):

Could you please recommend a book which would give the stamper numbers associated with the different pressings of a particular record.

I regret to say there is no such book and probably never will be. To my knowledge we are the only guys on the planet selling records who seem to know much about the subject. In fact, we pioneered the very concept, starting about fifteen years ago.

Back in the early ’90s I complained that the TAS Super Disc List didn’t list the “correct” stampers: the stampers (or matrix numbers if you prefer) being the individual markings associated with the actual pressing HP was calling a Super Disc. Without those stampers almost any pressing one might acquire would be different from the one on the list, and quite possibly inferior (or superior; in any event, different sounding).

We could rattle off all sorts of stamper numbers that should sound amazing. We have hundreds of them memorized, so that when we go to a record store we know what to buy and what to avoid. But the LP you find on your own with the “right” stamper numbers might sound dreadful, or no better than mediocre. Naturally, you would conclude we were to blame for recommending such a bad pressing. But our copy and your copy, both with the same stampers, don’t sound the same. In fact, if our experience is any guide, they can never sound the same. Similar maybe, virtually identical even, but like two snowflakes or two grains of sand on the beach, not truly identical. And, based on our experience, probably not even close.

Hey, Maybe You Should Write It!

Maybe after you have cleaned and played thousands and thousands of records you will want to write a book about the best sounding pressings you have discovered. We would love to read it. We’re all for the sharing of knowledge. Until then, we’re going to stick with our approach. It seems to be working, as most Hot Stamper pressings sell within a day or two of posting. Many times within hours. A glance at our Testimonials page tells the same story.

To me there is nothing more thrilling in audio than hearing a favorite, familiar recording sound better than I ever thought it could. If that’s the kind of thrill you are looking for, I recommend you visit the site as often as you can. Something of interest is sure to pop up. It can’t be found in a book. It can only be found right here — as far as I know — at Better Records.