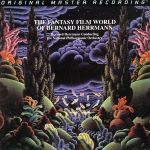 Obviously our customers know by now that a Hot Stamper London or Decca pressing is going to be far better than the Anadisq MoFi cut in the mid ’90s.

Their record was a complete disaster. Perhaps some of the MoFi collectors didn’t notice because they had nothing to compare to it.

God forbid they would ever lower themselves to buy as common a pressing as a London. Had they done so, what they would have heard is huge amounts of musical information that is simply nowhere to be found on the MoFi.

There is a place on this album, I failed to note exactly where, in which a group of tubas play a descending scale that is somewhat buried in the mix. On the London, they can clearly be heard and recognized as tubas. On the MoFi, I don’t think they can be heard except as some general group of low notes, and anyone thinking that they were tubas would be guessing, the sound is that murky, muddy, and ill-defined.

Robert Pincus once left a Post-It note stuck to the MoFi jacket of a copy he was playgrading for me that rather pithily summed up our thoughts on the quality of their mastering: “Did MoFi bother to listen to this before they ruined it?”

It’s positively shameful. This music is so good! On top of that, it’s custom made for audiophiles. Audiophiles are the ones who can appreciate the new colors Herrmann created, using what a wise man once called the single greatest instrument ever invented: the symphony orchestra.