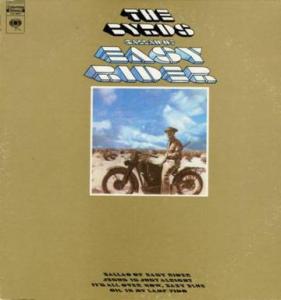 Every now and then we manage to stumble on a copy with some serious magic, and this is the best of those to ever make it onto our site. You won’t believe how much better this great country-rock material sounds when you have a copy that sounds as good as this one does.

Jesus Is Just Alright is the killer track here and it rocks like you will not believe! It’s one of the All-Time Best Byrds tracks, especially for sonics, with Rock and Roll energy that shows just how good a band these four guys had become.

What We’re Listening For on Ballad of Easy Rider

Jesus Is Just Alright
It’s All Over Now, Baby Blue
There Must Be Someone
Gunga Din
Deportee (Plane Wreck at Los Gatos)
Armstrong, Aldrin and Collins

If Dr. Byrds & Mr. Hyde found Roger McGuinn having to re-create the Byrds after massive personnel turnovers (and not having an easy time of it), Ballad of Easy Rider was the album where the new lineup really hit its stride. Gracefully moving back and forth between serene folk-rock (the title cut, still one of McGuinn’s most beautiful melodies), sure-footed rock & roll (“Jesus Is Just All Right”), heartfelt country-rock (“Oil In My Lamp” and “Tulsa County”), and even a dash of R&B (the unexpectedly funky “Fido,” which even features a percussion solo), Ballad of Easy Rider sounds confident and committed where Dr. Byrds & Mr. Hyde often seemed tentative.