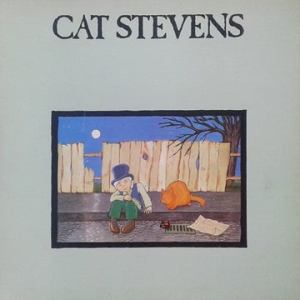 This Island Pink Rim pressing has the kind of Tubey Magical Midrange that modern records can barely BEGIN to reproduce. Folks, that sound is gone and it sure isn’t showing signs of coming back. If you love hearing INTO a recording, actually being able to “see” the performers, and feeling as if you are sitting in the studio with the band, this is the record for you. It’s what vintage all analog recordings are known for — this sound.

During the shootout for this record a while back we made a very important discovery, a seemingly obvious one but one that nevertheless had eluded us for the past twenty plus years (so how obvious could it have been?). It became clear, for the first time, what accounts for the wide disparity in ENERGY and DRIVE from one copy to the next. We can sum it up for you in one word, and that word is Conga.

We were listening to one of the better copies. The first track on side one, The Wind, was especially gorgeous; Cat and his acoustic guitar were right there in the room with us. The transparency, tonal neutrality, presence and all the rest were just superb. Then came time to move to the other test track on side one, which is Changes IV, one of the higher energy songs we like to play.

What We’re Listening For on Teaser and The Firecat

The Wind
Rubylove
If I Laugh
Changes IV

On this song there is a tremendous amount of energy in the grooves. On a copy I had a while back it sounded good to start with, but an intense cleaning regimen made it sound so alive I could hardly believe my ears. Listen to it VERY LOUD (as it was meant to be played) and then notice how quiet the next solo guitar intro is, with lots of space between the notes. Never heard it like that before. That’s when audio is FUN.

It’s always a roller coaster ride around here, as one day the system is cooking, and the next it ain’t, and nobody knows why. But the night that Teaser sounded great is one I will remember for a long time. Those big bass drum thwacks and that high hat being slapped to the point of abuse way out in front of the mix just blew my mind.

How Can I Tell You

There is a good-sized group of singers behind Cat Stevens that back him up when he says “whoa” right before the line “Where do you go?”. What often separates the best copies from the also-rans is how clearly those singers can be heard, assuming the tonal balance is correct and there’s plenty of energy in the performances.

The most transparent copies make it easy to appreciate the enthusiasm of the individual singers; they’re practically shouting.

The third album Cat Stevens put out in a 15-month burst that began in the summer of 1970 with Mona Bone Jakon, Teaser and the Firecat is where the enigmatic folk-pop idol crested commercially, if not artistically. Its immediate predecessor, Tea for the Tillerman, possesses an air of mystery and unforced whimsy that proved impossible for Stevens to replicate.

That said, the singer-songwriter had it in him to pull together a captivating collection that boasted two of the biggest hits of his meteoric, if self-inhibited, career — “Peace Train” and the sublime hymn “Morning Has Broken.” “The Wind,” “If I Laugh,” and “Moonshadow” are every bit as tuneful and appealing as the hits, while “Rubylove,” “How Can I Tell You,” and “Bitterblue” would be standouts….

We wrote extensively about the Tea for the Tillerman they released not long ago. We are guessing that their version of Teaser and the Firecat will not fare any better against our Hot Stampers. if you own their pressing, you owe it to yourself to hear just how much better The Real Thing sounds.

P.S. Just ran across the following in an old listing. We’re nothing if not consistent here at Better Records.

And if you are ever tempted to pick up one of those recently remastered versions on heavy vinyl, don’t do it. There is simply no one alive today making records that sound like these good originals. Not to these ears anyway. We may choose to indulge ourselves in the audacity of hope, but reality has to set in sooner or later. After thirty years of trying, the modern mastering engineers of the world have nothing to show for their efforts but a pile of failures. The time to call it quits has come and gone. Let’s face facts: when it comes to Tea for the Tillerman, it’s the Real Thing or nothing.