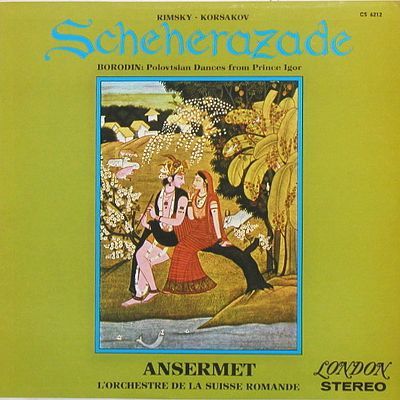 We did a monster shootout for this music in 2014, one we had been planning for more than two years. On hand were quite a few copies of the Reiner on RCA; the Ansermet on London (CS 6212, his second stereo recording, from 1961, not the earlier and noticeably poorer sounding recording from in 1959); the Ormandy on Columbia, and a few others we felt had potential.

Here it is seven years later and we’re capitalizing on what we learned from the first big go around, which is simply this: the Ansermet recording on Decca/London can not only hold its own with the Reiner on RCA, but beat it in virtually every area. The presentation and the sound itself are both more relaxed and natural, even when compared to the best RCA pressings.

The emotional content of the first three movements (all of side one) under Ansermet’s direction are clearly superior. The roller-coaster excitement Reiner and the CSO bring to the fourth movement cannot be faulted, or equaled. In every other way, Ansermet’s performance is the one for me. We did a monster shootout for this music in 2014, one we had been planning for more than two years. On hand were quite a few copies of the Reiner on RCA; the Ansermet on London (CS 6212, his second stereo recording, from 1961, not the earlier and noticeably poorer sounding recording from in 1959); the Ormandy on Columbia, and a few others we felt had potential.

Big brass, so full-bodied and dynamic, yet clear and not thick or overly tubey. Lots of space as is usually the case with Ansermet’s recordings from this era.

These two sides are BIG, with the space and depth of the wonderful Victoria Hall that the L’Orchestre De La Suisse Romande perform in. As a rule, the classic ’50s and ’60s recordings of Ansermet and the Suisse Romande are as big and rich as any you’ve heard. On the finest pressings (known around these parts as Hot Stampers) they seem to be the ideal blend of clarity and richness, with depth and spaciousness that will put to shame 98% of the classical recordings ever made.

The solo violin is present and so real you will have a hard time believing it.

These copies are huge in every dimension, just as all the best ones always are, with maximum amounts of height, width, and depth. The transparency is also superb — you really hear into this one in the way that only the best Golden Age recordings allow.

Although we did not listen specifically to the Borodin that takes up about half of side two — only the last movement of Scheherazade is on side two — we did hear wonderful sound coming from some of the copies we played, meaning simply that we feel the work is well-recorded.

What We’re Listening For on Scheherazade