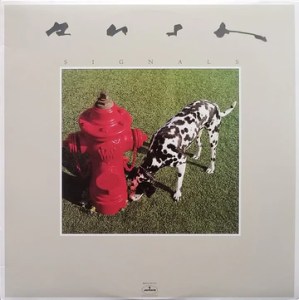 If you’re a fan of the band, you know what these guys are about — big-time technical prowess, dizzying effects, powerful solos and so forth. Many copies we played didn’t let you hear just how hard these guys are shredding… and then what’s the point? If the musicianship gets lost in the mastering, why bother with this band at all? We were looking for copies that didn’t let us forget who we were listening to.

Only the better pressings like this one give you the sound this music demands: rich and full-bodied with serious punch to the bottom end; an open, extended top; size and space, wonderful clarity and transparency; and most importantly of all, ENERGY. The life of the music is the number one quality we look for in rock, prog rock, art rock, folk rock and every other kind of rock we play. That will never change.

The drums and cymbals sound just right, which is essential on a Rush album — as just about everyone knows, Neil Peart’s drumming is a major highlight of anything the band does.

What We’re Listening For on Signals

Instead of playing it safe and writing Moving Pictures, Pt. II, Rush replaced their heavy rock of yesteryear with even more modern sounds for 1982’s Signals. Synthesizers were now an integral part of the band’s sound, and replaced electric guitars as the driving force for almost all the tracks.

And more current and easier-to-grasp topics (teen peer pressure, repression, etc.) replaced their trusty old sci-fi-inspired lyrics. While other rock bands suddenly added keyboards to their sound to widen their appeal, Rush gradually merged electronics into their music over the years, so such tracks as the popular MTV video “Subdivisions” did not come as a shock to longtime fans.

And Rush didn’t forget how to rock out — “The Analog Kid” and “Digital Man” were some of their most up-tempo compositions in years. The surprise hit, “New World Man,” and “Chemistry” combined reggae and rock (begun on 1980’s Permanent Waves), “The Weapon” bordered on new wave, the placid “Losing It” featured Ben Mink on electric violin, while the epic closer “Countdown” painted a vivid picture of a space shuttle launch.

Signals proved that Rush were successfully adapting to the musical climate of the early ’80s.