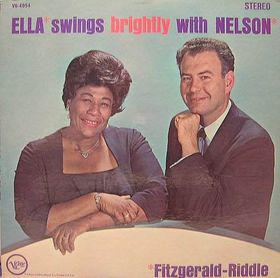 Take it from an Ella fan, you can’t go wrong with this one, assuming you can put up with some light crackle underneath the music. The record itself looks exceptionally clean and well-cared for, but it clearly does not play as quietly as we would have hoped.

The sound is rich and full-bodied in the best tradition of a classic vintage jazz vocal album. You could easily demonstrate your stereo with a record this good! The space is HUGE and the sound so rich.

This early stereo pressing has the kind of Tubey Magical Midrange that modern records cannot even BEGIN to reproduce. Folks, that sound is gone and it sure isn’t showing signs of coming back. If you love hearing INTO a recording, actually being able to “see” the performers, and feeling as if you are sitting in the studio with the band, this is the record for you. It’s what vintage all analog recordings are known for — this sound.

Copies with rich lower mids and nice extension up top (to keep Nelson’s string arrangements from becoming shrill) did the best in our shootout, assuming they weren’t veiled or smeary of course. So many things can go wrong on a record! We know, we’ve heard them all.

We’ve searched high and low for her records and played them by the score over the years. We plan to keep a good supply on the site in the coming years so watch for new arrivals in the Vocal section you see linked to the left.

Want to know what we are on about with all this talk of hardness and brashness? Easy, just play the average copy. Unless you have been exceptionally fortunate and chanced upon a properly mastered, pressed and cared for copy, you will hear plenty of both.

It’s one of the main reasons we have such a hard time doing shootouts for Ella’s releases from the ’50s and ’60s. The other of course is the poor condition most copies are in. Few pressings do not have marks that play or damaged grooves. The record players of the ’50s and ’60s, not to mention their owners, were ruinous on the albums from the era.

Which is simply another reason not to expect another top copy of this album to come to the site any time soon. Give us two or three years or so and we might be able to find another batch with which to do a shootout. In that time we will surely look at fifty copies, buy ten, and end up with at most five that are worth offering to our customers.

Obviously we wouldn’t bother if the music and sound weren’t so good. When you are lucky enough to find a copy that sounds as good as this one, you cannot help but recognize that this era for Ella will never be equaled, by her or anyone else.

When Your Lover Has Gone
Don’t Be That Way
Love Me Or Leave Me
I Hear Music
What Am I Here For?
I’m Gonna Go Fishin’ 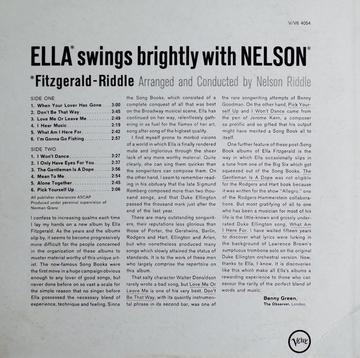