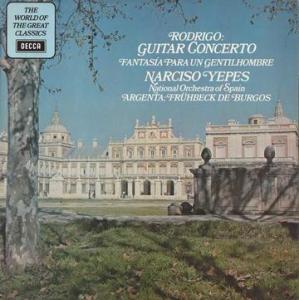 The second picture in this listing is the original London, CS 6046, from which the piece is taken. It is a longtime member of the TAS List, and deservedly so.

The Sound of the Strings

On some copies of this album the strings are dry, lacking the full measure of Tubey Magic we expect the tape to have. If you have a rich sounding cartridge, perhaps with that little dip in the upper midrange that so many moving coils have these days, you will not notice this tonality issue nearly as much as we do. Certainly you are less likely to be bothered by it. Our 17DX is ruler flat and quite unforgiving in this regard. While it certainly makes our shootouts much easier, it does bring out the flaws in all but the best pressings — exactly the job we require it to do.

What We’re Listening For On This Wonderful Recording

Joaquín Rodrigo was born in Sagunto, Spain, on November 22, 1901. In 1926, he moves to Paris, and becomes a student of Paul Dukas at the Schola Cantorum. From the French composer, Rodrigo learns the post-Debussy art of orchestration—the science of combining various instruments to create new sonorities, as well as the imaginative use of each instrument’s particular color.

In the first movement of the Concierto, for example, the answer to the guitar’s quasi-ostinato is given to the distinct and incisive attacks of the woodwinds, thus sustaining its rhythmic energy and vitality. In sharp contrast of mood, the characteristic rhythmic motion—alternating subdivisions of 2 and 3 beats per bar of the 6/8—is then picked-up, sotto voce, by the string’s spiccato. Similarly, it is the natural melancholy of the English horn—reminiscent of Ravel’s use of the instrument—that is chosen to answer the desperate chant of the guitar.

Apart from Paul Dukas, the general musical climate in France in the late-1920s—the neoclassical Six—also had an influence on Rodrigo’s style. The typical pointillism of neoclassicism endows the orchestral texture with a much-needed transparency, without forfeiting the instrumentation’s rich luster, thus ensuring the guitar’s audibility.

Even though Rodrigo calls for a full orchestra—2 flutes and piccolo, 2 oboes, 2 clarinets, 2 bassoons, 2 horns, trombones, and strings—rarely are all instruments used together. Certain only provide brief commentaries, darken or enlighten the palette (as if a mosaic), and Rodrigo chooses with care—according to the rhythmic impulse, the desire to produce a purely Spanish tone, or even to underline the color of a particular key—which instruments will accompany the guitar.

The Concierto de Aranjuez was premiered in 1940, and has since been, with the composer’s Fantasia Para Un Gentilhombre, one of the most appreciated pieces of the repertoire for guitar and orchestra.

The four movements were based on six short dances for solo guitar by the 17th-century Spanish composer Gaspar Sanz, taken from a three-volume work (1674, 1675, 1697) now commonly known as Instrucción de música sobre la guitarra española (Musical Instruction on the Spanish Guitar) (Donis 2005:75). Most of the movements retain the names that Sanz originally gave them. Rodrigo expanded on Sanz’s themes to produce a work lasting more than 20 minutes.

Rodrigo composed the concerto in 1954 at the request of guitarist Andrés Segovia, who was evidently the gentilhombre referenced in the title.[1] Segovia took the solo part at the premiere performance on March 5, 1958, in San Francisco.[2] The San Francisco Symphony was conducted by Enrique Jordá. – Wikipedia