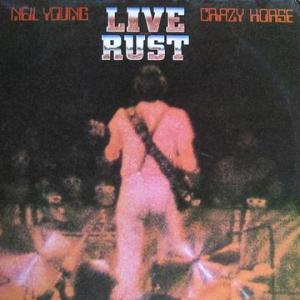 Neil Young and Crazy Horse are really tearing it up here, and on a copy like this, the sound is amazingly REAL.

This vintage pressing has the kind of Tubey Magical Midrange that modern records rarely even BEGIN to reproduce. Folks, that sound is gone and it sure isn’t showing signs of coming back. If you love hearing INTO a recording, actually being able to “see” the performers, and feeling as if you are sitting live in the audience, this is the record for you. It’s what vintage all analog recordings are known for — this sound.

What We’re Listening For on Live Rust

Sugar Mountain
I Am a Child
Comes a Time
After the Gold Rush
My My, Hey Hey (Out of the Blue)

Like a Hurricane
Hey Hey, My My (Into the Black)
Tonight’s the Night

Live Rust was the soundtrack to Young’s concert film Rust Never Sleeps (he had wanted to give it that title, but Reprise vetoed the idea, fearing confusion with the earlier album), and likewise was recorded October 22, 1978, at the Cow Palace in San Francisco.

But much of the Rust Never Sleeps album had been recorded on the same tour, and Live Rust repeated four songs from that disc; besides, since Young had released the career retrospective Decade in 1977, critics felt he was unfairly recycling his older material and repeating his new material.

In retrospect, however, Live Rust comes off as an excellent Neil Young live album and career summary, starting with the early song “Sugar Mountain” and running through then-new songs like “My My, Hey Hey (Out of the Blue)” and “Powderfinger.” Young is effective in both his acoustic folksinger and hard-rocking Crazy Horse bandleader modes.

The various distractions of the concert itself and the film, such as the pretentious props and cowled roadies, are absent, and what’s left is a terrific Neil Young concert recording.