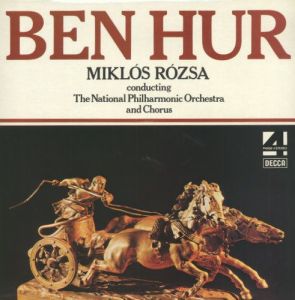 This TAS List Super Hot Stamper pressing of one of the greatest and most famous Orchestral Blockbuster Soundtracks ever recorded more than lives up to our expectations for Decca Phase 4. This is Phase 4 done RIGHT.

As with all the best Herrmann releases, the huge size and scope you hear is the sound of orchestral music recorded in glorious ANALOG!

The sound is so clear, spacious and three-dimensional that you will feel as if your speakers have disappeared before your very eyes.

The layering of depth is really something to hear on this copy, with choirs of brass instruments located precisely in space, some further back, some off to the side of the soundstage. And what a soundstage it is, so wide and deep. Transparency – a quality you find on both sides of this copy — is what makes this all sound so REAL.

Note that we have been especially anti-heavy vinyl in our recent commentaries for their consistently opaque character, the opposite of what is necessary in order to hear into the music, deep into the soundstage, to see and hear ALL the instruments, even the ones at the back.

Try that with any Classic Record or Speakers Corner pressing. It’s records like this that show you precisely what you have been missing all these years if you have been collecting and playing releases from those labels and the others like them.

Yes, Decca in 1977 managed to keep its lovely Tubey Magical analog sound without getting mired in the muck of too much tube smear and thickness, the kind that bedevils so many pressings from the ’50s.

Couple that with real bite to the brass and texture to the strings and you have the best of both worlds!

So big and rich! This is why audiophiles love these records! A little more extension up top and you would have yourself a nearly flawless record. (The harps and bells aren’t quite as clear as they should be.)

Again, a little more extension up top would have helped. Listen to how the trumpets just JUMP out of the soundfield! What a record!

Miklós Rózsa (18 April 1907 – 27 July 1995) was a Hungarian-born composer and conductor, best known for his numerous film scores. Along with such composers as Bernard Herrmann, Erich Wolfgang Korngold, Alfred Newman, Max Steiner and Franz Waxman, Rózsa is considered to be one of the “founding fathers of film music.”

Rózsa was one of the most respected and popular composers working in Hollywood. He is also regarded today as one of the greatest film score composers of all time. In a career that spanned over fifty years, he composed music for nearly 100 films, including Spellbound (1945), Quo Vadis (1951), Ben-Hur (1959), and King of Kings (1961).

Rózsa is one of the most nominated composers in Oscar history: he had 16 nominations and three Oscars. He also had three Golden Globe nominations, and a Grammy Award nomination for the MGM Records album of Ben-Hur..