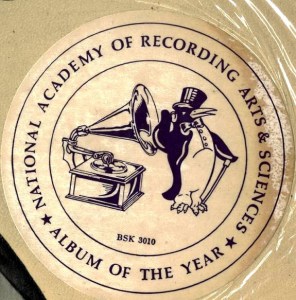 Case in point: consider how quietly The Chain starts out and how loud it is by the end. Those kinds of macro-dynamics are very rare on a pop recording. Rumours has the kind of dynamics you just don’t hear anymore, which is why the killer copies are a such a THRILL to play on a big dynamic system fitted with a top-notch turntable!

The best copies exhibited the kind of presence, bass, dynamics and energy found only on the kind of Super Demo Discs we rave about here endlessly: the BS&Ts, Stardusts, Zumas and the like. When you get a good copy of this record, it is a Demo Disc.

Who knew? Who even suspected? Who raves about Rumours but us? Let’s fact it, the audiophile world has no clue how good this record can sound.

What do the best copies have that the also-rans don’t? Lots and lots of qualities, far too many to mention here, but there is one you may want to pay special attention to: the sound of the snare. When the snare is fat and solid and present, with a good “slap” to the sound, you have a copy with weight, presence, transparency, energy — all the stuff we ADORE about the sound of the best copies of Rumours.

Next time you are on the hunt to buy new speakers, see which ones can really rock the snare on Dreams. That’s probably going to be the speaker that can do justice to the entire Rumours album, as well as anything by The Beatles, and Neil Young’s Zuma, and lots of our other favorite records, and we expect favorites of yours too.

This instruments on this track, and I mean practically all of them, should positively JUMP out of the speakers. Second Hand News is built on a solid foundation of deep punchy bass, so if your copy is at all lean (Nautilus anyone?) you will not be getting what you should out of this song. It’s the lead-off batter for one of the best song lineups in the history of pop. Lightweights need not apply.

The picking of the acoustic guitars on this track should sound wonderful; all their harmonic structures are fully intact and clearly audible. In other words, the guitars were recorded right and that’s the way they should sound. They frequently sound dull (lacking texture) or thin (lacking body: the strings are connected to a guitar body, not floating in the air).

The vocals are very silky on the good pressings. Some of the vocals on Rumours can strain; not so here.

Don’t Stop
Go Your Own Way

The choruses of this album have them shouting out the lines like lovers during a knock-down drag-out fight, because that’s what it is. All the hurt and anger is there in the delivery of the lines. Copies that convey that energy and emotion are doing their job and the rest are faking it.

Thirty seconds into this track you should be able to tell if you have a hot side two. Tons of ambience, a wide and beautifully transparent soundstage, perfect tonality: all the special sonic qualities of the best pop recordings should be on display from the very beginning of this song. It should also be noted that this is one of the all time great Fleetwood Mac tracks. I’m a fan of their earlier stuff, but you can’t argue with a Musical Statement of this calibre.

I can’t think of another Fleetwood Mac song with more raw emotion. The best copies bring out the pain in their voices like you would not believe. It’s on the tape, but you can only feel the full power of it when the pressing lets you, and those are tough to come by.

I remember playing this song — it has to be close to twenty years ago — when I first discovered how good this album could sound, and thinking that I could hear Christine McVie’s voice clearly for the first time. It had always sounded muffled. The reason it had always sounded muffled is simple enough: most pressings of this album are crap. Our equipment from that era was also lacking. Now we can hear her just fine, and on these Hot Stamper copies there’s even a fair amount of ambience around her voice, the more the better.

Finding a copy that plays mint minus on this track is practically impossible.

The sound will be open, spacious and transparent with a huge three-dimensional soundfield.

On the best pressings Christine McVie’s vocals are solid and present, Stevie Nicks’ breathy and clear.

The overall sound can be surprisingly rich, sweet and warm — that’s analog, baby!