As I say, it’s just a theory, and as time goes on we will revisit this idea with other recordings that we know to have polarity issues, and we’ll be sure to let you know what we find.

The best sounding versions we played are cut super-clean; the brass and strings have dead-on correct textures and timbres.

As good as some pressings are, the best pressings are clearly a step up in class. The brass has more weight and body and richness. Same with the strings. The voice gets fuller and sweeter and less sibilant, while still maintaining every nuance of detail. The presence is startling; Belafonte is absolutely in the room with you.

Harry Pearson brought this record to the attention of audiophiles with his TAS list a long time ago, and rightfully so: it’s an amazing recording.

We happen to love the music too, which makes it one of the most recommendable records we have ever offered. If you can find a better combination of demo disc sound, with music worth the hassle and expense of reproducing it properly, more power to you. We sure can’t.

Because this is a live recording, because it has lots of natural instruments as well as a vocal, because it was recorded in the Golden Age by one of the greatest labels of all time, RCA, by Bob Simpson no less — for this and many other reasons, it has to be considered one of the most amazing recordings in the history of the world.

That said, it is our contention (and the basis of our business model) that the brilliant quality of the recording can only be appreciated if you have the pressing that captured the sound that the engineers recorded. In other words, a Hot Stamper.

From an audiophile point of view, you get to hear live musicians and all the energy they bring to this music, all on the stage at the same time: strings, brass, percussionists and Harry Belafonte front and center. Tube mics (and not too many of them), a tube tape recorder, RCA’s superb engineering and all-tube mastering chain ensure that the “breath of life” is captured intact. I know of no better live popular vocal recording on the planet.

What We’re Listening For on Belafonte at Carnegie Hall

A Live Orchestra Needs This Kind of Space

We consider this Harry Belafonte album his Masterpiece. It’s a recording that should be part of any serious popular Music Collection.

This is a wonderful song, sung by Belafonte with virtually no accompaniment. His voice should be rich and full-bodied with plenty of presence. In other words, he should sound like a living, breathing person.

The liner notes say this song was introduced in the previous year in Las Vegas. Before I read that I noted that the uptempo arrangement had a jazzy feel to it. The walking bass is well up in the mix and the piano and a few of the other instruments in the song are well behind — it’s pretty much Belafonte and bass. The bass is deep and very note like. (This is of course a big system record. Do not expect good results from small speakers.)

But what makes this one of the best Demo Quality tracks on the album is Belafonte’s amazingly energetic performance. He really sells this song. As I was listening to the dynamics on the best pressings, it makes me think about all the compressed-to-death vocals that are so much a part of the recording style of the modern era. Nobody gets loud anymore. Belafonte did back in 1959, and not too many followed him. 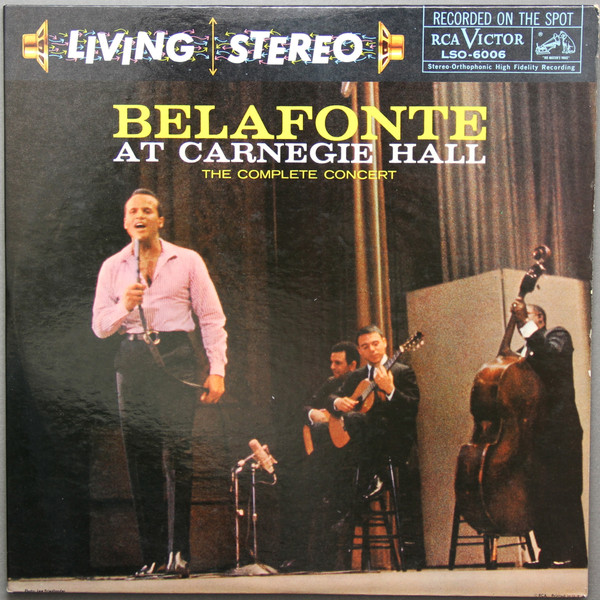